A beautiful day in Mesa, a hazy sky and temperatures in the mid 70s helped entice 13,465 fans (a single game Hohokam record) to come out and witness the Cubs beat the World Champion Giants (a split squad version). The exciting walk-off win in the bottom of the 10th inning was courtesy of  a Wellington Castillo single that drove in Bobby Scales from 2nd base. The Cubs are making a habit of these walk-off wins at Hohokam, this being the fourth such win in 12 home games.

Randy Wells if he hadn’t already cemented a spot in the starting rotation probably did with today’s outstanding effort. Wells went 6 innings allowing the opening two Giant batters hits which scored a run but then was untouchable setting down 18 straight Giants hitters including 7 strikeouts. The Giants other run was given up by Sean Marshall in the 8th inning while John Grabow and Marcos Mateo each tossed a scoreless inning and Carlos Marmol shut down the Giants 1-2-3 in the 9th.

Marlon Byrd continues his hot hitting going 2 for 2 with a run scored. Bobby Scales played the whole game at second base and had a couple hits also scoring the game winning run. Wellington Castillo in his bid to unseat veteran catcher Koyie Hill knocked in the winning run, and is still batting over .700.

Mesa Hohokam member Danny Page and his girlfriend Becka O’Bray sang the 7th inning stretch. The surprise came after the singing as Danny dropped to one knee and popped the question. You better be darn sure you know the answer she’s going to give when you’re doing that on the Cubs dugout in front of over 13,000 people. She did say yes.

Another well-pitched game by Sean Marshall, he seems to be more and more… 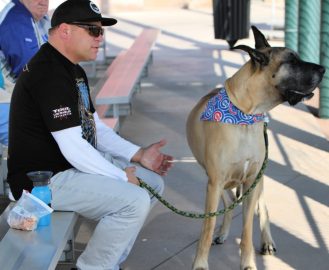