A unique perspective on the Cubs, baseball, and life, from the El Duderino of baseball (if you're not into the whole brevity thing). 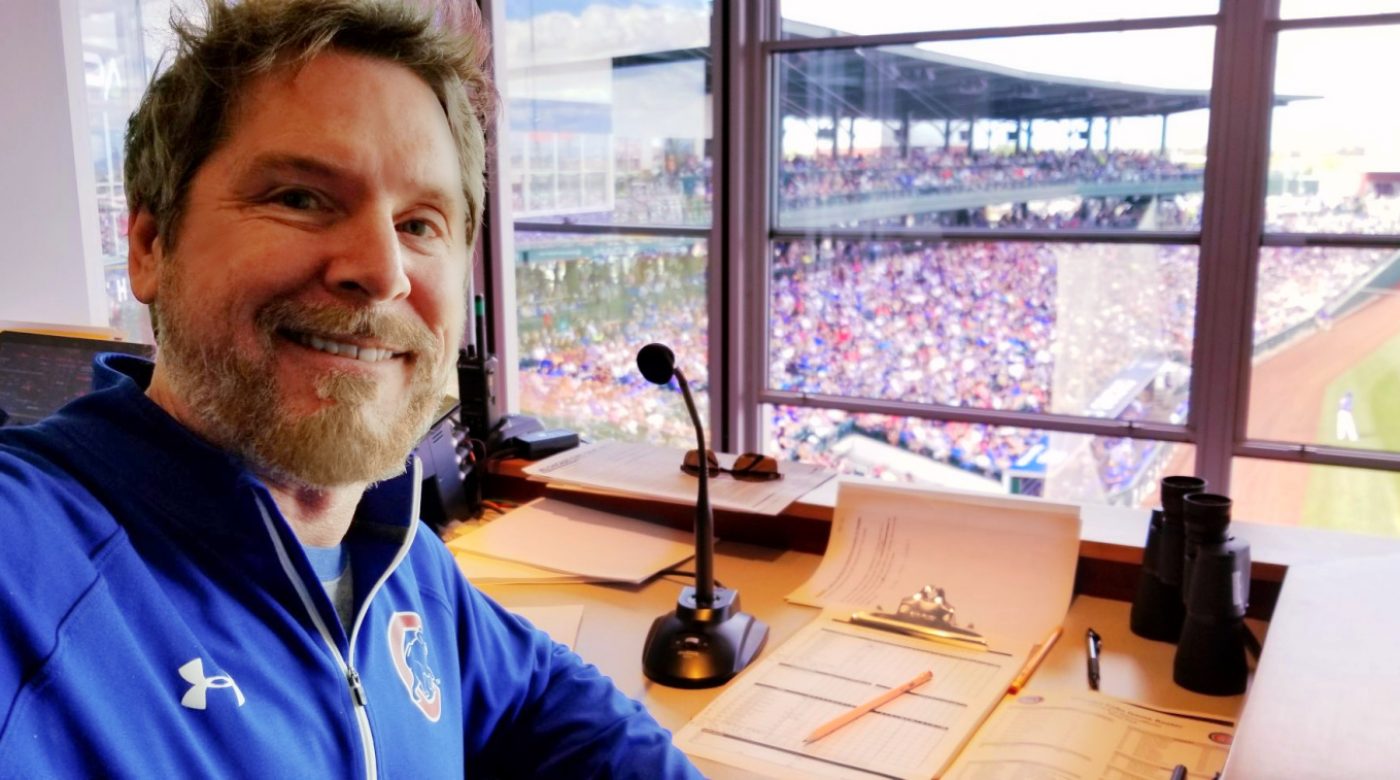 Spring is our thing, but we don’t stop there, we live the Cubs life!

“Who wants to help out at Cubs spring training?,” my broadcasting class college professor asked. Within seconds, hands shot into the air. And so began my 38 year journey into Cubdom. A hand raised. Quick reflexes. And within a week that spring semester of 1984, I was doing some of the public address announcing for the Cubs and sitting beside Harry Caray in the press box.

Arizona didn’t have a MLB team back then, but cable super station WGN broadcast the games across the country. So when spring training ended, I could continue watching Cubs games from Arizona.  And what a season it was, winning the division and going to the playoffs for the first time in almost 40 years! I was hooked.

How I’m still doing the public address announcing for Cubs spring games all these years later, I’m not quite sure. As amazing as announcing each spring for the Cubs has been, it’s a part-time job that only lasts a month. But I keep coming back. Year after year. And people always ask, what do you do the rest of the year?

A valid question and, depending on the year, I’ve worked for local Phoenix TV stations in both Sports and News, been a marketing and community relations manager, photographer, Executive Director of a museum, filmmaker, and for most of the past two decades, a business owner. I attribute my longevity with Cubs spring training not only to my love of baseball, but also my love and loyalty to the team. No matter how many obstacles came into play over the years, like the proverbial moth to the flame, I couldn’t wait to get back to the ballpark every spring!

“I attribute my longevity with Cubs spring training not only to my love of baseball, but also my love and loyalty to the team.”

Being part of Cubs spring training for so many years has been phenomenal. I’ve been lucky enough to announce over 40 MLB Hall of Famers during my time in the Cactus League. Some of my most cherished moments have been, handing my public address microphone to Harry Caray to sing the 7th inning stretch (I estimate roughly 100 times), and being the first Cubs public address announcer to utter the words: “Your World Series Champion Chicago Cubs!”

Receiving a World Series ring from the Cubs after the 2016 championship was frosting on a pretty awesome cake.

Longtime visitors of this site likely remember me talking about a Cubs documentary film I was working on…that film never came to fruition. There are plenty of reason’s the film wasn’t completed; lack of funding, deceptive film executives, timing, and the biggest factor, I’ve been filming the Cubs for roughly three decades and never figured out a way to synthesize it all into one 90 minute film. I didn’t start out to make a documentary, I just liked to film stuff and every year, for about six or seven weeks, I got to hang around the Cubs. So I filmed and took photos…filmed and took photos…filmed and… Yeah. That.

So, CubTalks… I was watching a “TedTalks” segment and had a spark of inspiration (that happens during “TedTalks”). Why not break up the documentary film into an ongoing weekly web series? The archives of Cubs footage and interviews I’ve done number in the thousands of hours. And the Cub stories…there seems to be no end to those. Since I possess the film, video, and photos to put with those stories, why worry about one documentary film when I can give Cubs fans a mini-film every week!  Definitely my Eureka moment…and thus was born, “CubTalks with Tim Sheridan.”

I know ideas change over time and if you think you have a good idea, sometimes you just have to go with it. It’s been a pleasure to add the CubTalks series to our ongoing fresh content here at BOS, and I’d love to hear your input now that you’ve seen the first season. I’m sure the series will continue to evolve as time goes on, but one thing is sure, I plan to keep having fun doing it! I hope you enjoy watching!

About Boys of Spring

In 2002, I came up with the concept of creating a Cubs related website that gave hard-core fans an insiders’ view of the team during spring training.  I wanted to give Cub fans access to never seen photos and video I’d been shooting of the team each spring. The Boys of Spring website seemed the perfect way to share my passion for the Cubs with my other passions – photography, video, and film.

Why the name Boys of Spring?  One of my favorite books as a kid was the transcendent baseball novel by Roger Kahn – The Boys of Summer. The title of Kahn’s 1972 opus has since become synonymous with baseball players in general. Of course my niche is spring, so it made perfect sense for this new website to play off The Boys of Summer theme. Early in 2003, a domain search revealed boysofspring.com was available. Bingo! It was mine. And no, I don’t mind if you mistakenly call it boys of summer, it happens a lot!

One of my favorite books as a kid was the transcendent baseball novel by Roger Kahn – The Boys of Summer.

Getting a domain name is one thing, but having a real working website is a whole different animal…especially back in 2004, when you basically needed to be a programmer to build a website. Over the course of the next year, BOS 1.0 was designed and built. In February of 2005 Boys of Spring went live on the internet. The whole blogging phenomenon began to explode at the time of our launch, but I still wasn’t sure exactly what BOS was, or would become. It didn’t take long to realize that this was a perfect place to share my experiences, thoughts, photos, and video, of my Cubbies with other fans.

There were hiccups along the way, technical and otherwise. When we launched in February of 2005 there was no YouTube! The first YouTube video was actually uploaded by the founders of YouTube on April 23, 2005 – after spring training had ended. In those early years, we hosted our own videos, which was a storage eater and loading nightmare. By early 2007, we began the transition to YouTube, helping ease storage and loading issues.

Check out the first video I loaded on YouTube  January 3, 2007 of Ryan Dempster doing his Harry Caray impersonation (from spring of 2005). It’s the very first recording of Dempster doing the Harry impression ever loaded onto YouTube and it’s hilarious!

The original build of Boys of Spring was a one-person operation, I was the only writer, photographer, videographer, and editor. Other than some “guest photos” it stayed that way from 2005 until spring 2011, when I met up-and-coming photographer John Antonoff.  John shared some of his Cubs’ photos on my blog in spring of 2011. Meeting  John was fortuitous since I’d only been able to shoot game photos when the Cubs were on the road due to my announcing duties in the press box.

From the start, John was an outstanding photographer, but in the early days, he was shooting from the stands without any press credentials. John’s talent was soon noticed by others, eventually landing him several cover photos on the Chicago Sun-Times. Despite John’s success, he’s stayed true to his roots and keeps shooting for Boys of Spring. I’m indeed lucky to have him!

So here we are celebrating the 17th year of Boys of Spring. How fast the time goes when you are having fun! I’m excited that “CubTalks with Tim Sheridan,” has finished it’s first season, with thirty fun episodes. We hope you’ve enjoyed the videos, I’ve certainly enjoyed producing them. Thanks to every one of you who’ve stopped by over the years! It’s been a pleasure to bring you my passionate view of our beloved Cubs. Cheers to the next 17 years!