Beautiful weather today here in Mesa as the Cubs wind up practices at Fitch Park before moving up the street to Hohokam Stadium. Tomorrow’s (Thursday) practice will be the final workout at Fitch Park for the team, at least the major league players and non-roster invitees. Minor league players will begin working at Fitch, while the Cubs will hold intrasquad games at Hohokam on Friday and Saturday before officially kicking off the start of the Cactus League season on Sunday against the Oakland A’s. The intrasquad games are free and open to the public, gates open at 11am with the games starting at 1pm. The grass/berm area will be closed and seating will be in designated areas. The contests will likely only last 5 or 6 innings, but the price is right!

Over the course of my years as the Cubs spring P.A.announcer at Hohokam and Old Hohokam Park I have seen 11 Cub managers hold spring camp. This gives me a bit of a feel for how things are run and the differences between managers. By the way, there have been more than 11 managers during that time (16 officially, I believe) but several were ‘interim’ and never held a spring camp.  It’s still early yet but I’m getting a very good vibe about what’s happening here at Fitch, and a feeling that there is a long term plan in place. The kind of players the new leadership is bringing in to the Cubs system bodes well for long term success.

One of those players is first base prospect Anthony Rizzo, you likely know he was diagnosed in 2008 with Non-Hodgkin’s Lymphoma and that he overcame it with successful chemotherapy. At Fitch, Rizzo has been in a bp hitting group with Brett Jackson, Josh Vitters, and Adrian Cardenas. Jackson and Rizzo appear to have developed a good rapport. These two players are part of a young and talented group who give Cub fans real hope for the future. What I like about Rizzo is exemplified in what I saw today after the team workout, he stayed on the field with third base coach Pat Listach and worked for another 20-30 minutes on his fielding. By most accounts the 22 year old Rizzo has a good glove, so seeing him specifically working at fielding difficult short hops after practice shows some dedication.

You may wonder what these guys talk about during bp when they are waiting their turn in the cage, you can probably guess some of the topics. The other day we had Brian Harper throwing bp, Harp is the Cubs Double-A Manager at Tennessee and also a SoCal guy. He played for a number of MLB teams and was part of the Twins 1991 World Series winning team, in fact Harper caught the Jack Morris 10-inning masterpiece in game 7. At any rate, Harper and Josh Vitters who is also a SoCal product were saying it was SoCal vs NorCal, giving Brett Jackson (a NorCal guy) some grief. Someone said “all you NorCal’s are hippies” to which the effervescent Jackson proclaimed, “Hey, somebody has to love the earth”. To which Vitters stated that his “V-Neck t-shirts are made of organic cotton” and that he also eats organic. I’ll try to slip Josh an all natural recycled locally grown sustainably harvested bat to help give his swing an organic boost.

I meet a lot of Cubs fans from all over the U.S. at Fitch and Hohokam. I’ve also met fans from Canada and Mexico, but today I met an unlikely Cubs fan from Paris, France. That’s right Paris, “La Ville-Lumiere” (The City of Light), and this wasn’t a transplanted American living there but a fan who grew up in the sunny south of France and now lives in Paris. I asked Ludivine how she became a fan. She informed me she was a history buff and baseball being the oldest professional team sport in America intrigued her. She lived in Washington DC for a few years and at that time decided to pick a team to follow. She identified with the plight of the lovable team from the Northside. A fan was born. What I found interesting was that she is not a casual fan, this girl knows her Cubs players and history. As it should be. We went to lunch so I could further indoctrinate her into Cubs nation and she was great company.

The voting is closed for the Ryno award and we will be presenting all of the Boys of Spring – Best Cubs Site Awards in the next few days so be on the lookout for that.

Here are some of my photos from today and yesterday ~ 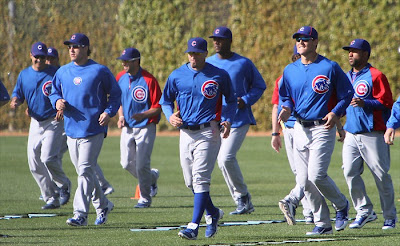 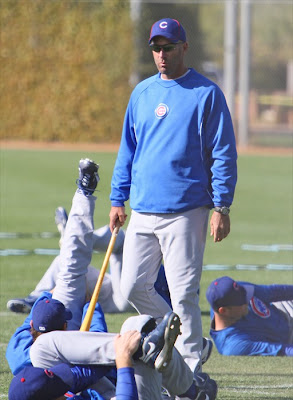 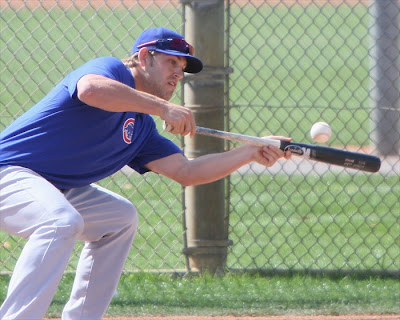 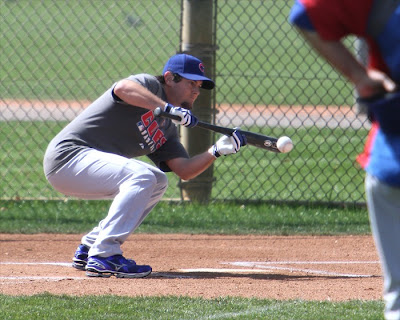 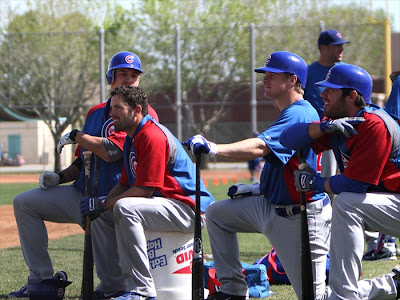 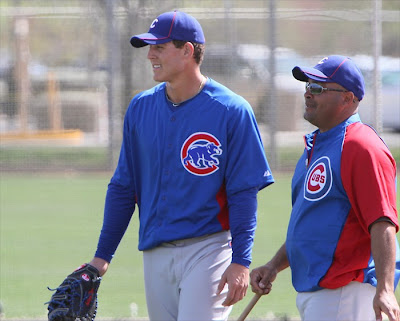 Pitchers and catchers had their official first workout of spring camp today. Here are some of my photos from Cubs Park in Mesa.

The Good the Bad and the Ugly

The good. Plentiful sunshine, 76 degrees at first pitch, and a Cubs 8-6…