The Cubs wrapped up the first homestand and week of  the season with a 3-3 record, which is about the pace many predicted for the 2011 team. Yesterday the Cubs were trying to finish a three game sweep of the AZ DBacks but were not helped by 3 errors (the first multiple error game of the year for the Cubs) and lost 6-4.  Sure they are at a .500 record we have seen some nice things in week one, Starlin Castro’s continued emergence both offensively and defensively, good starts at the plate by A-Ram and Soriano, Darwin Barney looks like a keeper, and the pitching for the most part has been solid. The recent injuries to Randy Wells and Andrew Cashner are unfortunate but don’t appear to be anything major (fingers crossed).

The Cubs had a good chance to win 2 of the 3 games they lost (being tied or having a late lead), which would have made them 5-1 instead of 3-3. Yes I know, could-a would-a should-a, but as most of you will remember the Cubs lost a huge number of one run games last season, so the question going forward is – Can this team start winning the close ballgames and stay in contention? Tomorrow the Cubs take to the road for the first time travelling up to Milwaukee to play the Brewers. The early stage of the season is still very interesting especially to see which direction Q’s team will progress – bring on week two.

The Library of Congress this week picked among it’s 25 selections for this year’s National Recording Registry the 1908 tune, “Take Me Out to the Ball-game”. The recordings were chosen for their cultural significance. As we know it was Harry Caray who really took the song from a nice baseball tune to a baseball 7th inning anthem. When Harry sang the song during the stretch at Wrigley Field he used the generic WGN broadcast microphone but that wasn’t the case in spring training. At Old Hohokam Park I would introduce Harry and the 7th inning stretch, then Harry would sing it over my public address mic. So in the interest of cultural and baseball significance here is Harry singing “Take Me Out To The Ball Game” at Old Hohokam Park in 1994 as video-taped by me. If you listen real close you can hear the mic hit my camera as Harry swings it back and forth. I also added the lyrics to the video for “Play Ball – The Cactus League Experience” exhibit on spring training. 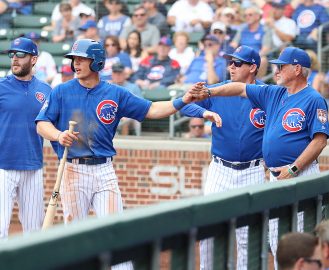 First Round Draft pick out of Stanford, is another talented infielder/shortstop who looks to break his way into the big leagues sooner...

We Needed a Fuku-Dome Today

Talk about fun, it was a great day to just be a fan…