Three words– pitchers and catchers! Yes ladies and gentleman, boys and girls it’s only one more day until the boys of spring show up at here in . The Cubs pitchers and catchers will then take to the fields on Thursday for their first workout under new Manager Lou Piniella. Of course I will be at monitoring the situation for all of you Cubs fans who can’t be there in person. Looks like it will be around 70 degrees and sunny for the first workout, I almost feel guilty saying that as I know the weather has been rough lately in much of the country.

When he arrives tomorrow the spotlight will be shining on star Pitcher Carlos Zambrano after an interview with WGN-Ch. 9 in which he said: “I want to sign with the Cubs before the season starts. If they don’t sign me, sorry, but I must go.” Zambrano is asking $15.5 million in arbitration, while the Cubs offered $11.025 million, quite a difference in numbers that might lead to an arbitration hearing Feb. 20. The Cubs have spent like never before this off-season, so we’ll see how deep Jim Hendry and the Cubs pockets go. One thing is sure; Big Z is throwing some serious heat even before stepping on the field.

Apparently former Cubs make good broadcast analysts as FOX has hired Mark Grace, Joe Girardi, and Eric Karros, the three will rotate between working pre-game shows and doing games each week. Former No. 2 analyst Steve Lyons was let go after making what were deemed ethnically insensitive on-air comments last season. Grace calls Arizona Diamondbacks’ TV games; Girardi was fired by the Florida Marlins after being named last season’s National League manager of the year, and Karros moves to FOX after doing games for ESPN last season. How good the former Cubs are, or will be as analysts of course depends largely upon the viewer’s personal taste. Joe Buck and Tim McCarver will remain FOX’s No. 1 broadcast team.

We are at the very beginning of baseball’s long journey, I’m hoping the Cubs will wipe away the bad taste of last season and do what the club hasn’t been done in nearly a century. Many of you know I’m an optimist by nature but the realist in me will be happy if the Cubs are at least a true contender this season. It’s now time for me to be your eyes and ears for the next month and a half while the Cubs are here, check back often as I will be blogging regularly and offering some new surprises. If you have questions about spring training or the Cubs progress drop me an email at [email protected]

This year is here!

This blog isn’t about today’s Cubs spring training game, because of the passing… 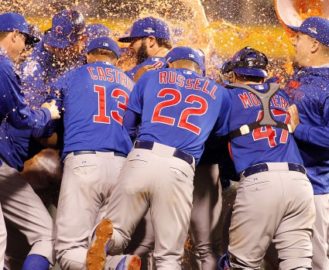 What a great game played be the Cubs last night, a 4-0 shutout pitched by Jake Arrieta over the Pirates in Pittsburgh! A long awaited post-season win and now a chance to play the Cardinals. With Arrieta pitching, a 3-0 lead seems somewhat comfortable, but ...

Darwin and the Evolution of 2nd Base