Pitchers and Catchers have now had two days of workouts, so after such a long stretch it’s time to draw some conclusions about Mike Quade and this years Cubs.
1. The Cubs have the shortest nickname for a Manager, heck for anyone – Q.
2. Q liked his Valentine gift – a closer.
3. Q likes to rock – Zeppelin style. OK, I’m done saying – Q. 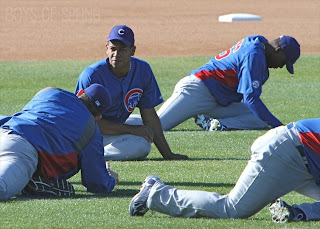 4. Carlos Silva is very confident, as today he verbally claimed one of the spots in the Cubs rotation. That’s strong talk for a guy who finished last season with elbow tendinitis and a 2-6 record after starting 8-0. Silva’s rotation proclamation was delayed 24 hours due to his being out sick on day one.

5. Tony Thomas is not in the Cubs future plans, pitcher Robert Coello might be.
6. We’ll soon see Tyler Colvin playing first base a bit at Hohokam.
7. As exhibited by some Cubs quotes, it’s never too early to get serious. “I’ve always been kind of goofy, I guess” – Ryan Dempster. “We’re young and dumb and ready to throw strikes” – James Russell. “Just got to get goofy and have a good time” Brett Jackson. These quotations may be a bit out of context not having the surrounding comments, but who knows this may just be the attitude needed to win a Cubs World Series.
It’s been a busy two days and position players aren’t due until Friday, we can only speculate as to what revelations the next 48 hours will bring.

Happy St. Patrick’s day, or night as is the case! The Cubs lost…