Happy Presidents’ Day! Surely a holiday that gets the ho-hum if their ever was one. But having just celebrated the 200 year anniversary of Lincoln’s B-Day last Thursday, I started thinking about how our country, as it is today, might be totally different if it weren’t for the two icons we honor this day. Maybe we tend to feel a bit of disconnect because of the length of time since these two presidents have been gone, especially Washington. It’s ancient history as some say. Well, it’s history, but not necessarily ancient, especially regarding Lincoln. Case in point, I recently talked with someone, who talked to someone, who had talked with Lincoln. Did you get that?

No, I’m not talking about Lincoln Holdzkom, the hard-throwing ex-Cubs farm hand who went to high school in Yuma, AZ. I’m talking about our 16th president Abraham Lincoln, the rail splitter, the self taught scholar, the emancipator.

Some back story first–my grandmother Millie, had a passion for researching family history. In those pre–internet days, she was limited in the tools with which to conduct that research. However she traced her father’s line back to Illinois, and I remember her showing me an old yellowed newspaper clipping about a Judge Finley from Stark County, Illinois. Grandma Millie eventually succumbed to Alzheimer’s, which is part of the reason “Boys of Spring” supports and donates to the Alzheimer’s Association. She got me interested in genealogy, and a few years back, I decided to take up the search for my family’s Illinois roots. That search led me to the town of Toulon, Illinois, where the county courthouse that this Judge Finley presided, still stands. My ancestor Judge Finley was the second Judge of Stark County, his photo is on the wall. The significance in my mind, is that Judge Finley presided in Stark County from 1857-1862… during the time of the famous Lincoln -Douglas debates. While the two candidates didn’t debate in Toulon, both Lincoln and Douglas spoke in front of Toulon’s courthouse on separate days in October of 1858.

With the aid of the helpful Toulon genealogical society, I found and met a distant cousin who lives in the area. After some family history conversations, I learned his mother was in good health at 91 years old. Interestingly, her grandfather Andrew Jackson Finley (Judge Finley’s son) was at the Lincoln speech in Toulon in 1858 where A.J. Finley met and spoke to Lincoln. A.J. lived to the age of 100 and, when he was about 94, he told his then 10-year-old granddaughter about the day he talked to Lincoln. Of course, the granddaughter grew up to be the 91 year old cousin I was able to talk with about Lincoln. So it was, that I talked with someone, who talked to someone (her grandfather), who had talked to (the not yet President) Lincoln. Hearing her speak about conversations with her grandfather who met and spoke with Lincoln made history seem a bit closer to home–and not as distant.

That means Lincoln the legend, the hero, the preserver of the nation is just a few degrees of separation from any of us. So while Presidents’ Day seems to get lost under the commercial avalanche and media barrage of Valentine’s Day, but it’s a day to take a moment and appreciate the things we have and those great leaders who helped preserve and grow our nation.

OK, on to the Cubs, as usual I’ve posted photos below from today’s practice at Fitch Park. Good to see more of the position players showing up early including Milton Bradley…”The Game”…I didn’t coin that name but it fits. I noticed at one point Lou Piniella subtly strolled over from the pitchers fields and watching the position players take BP from a spot where he wouldn’t be noticed. Lou doesn’t miss much. The usual drills today, one that I like is with this spongy type baseball that is very fast when hit. Great for hitting hard grounders to sharpen the pitchers reflexes without the worry of injury…In fact I saw Big-Z field a screamer with his bare hand; he actually wasn’t wearing a glove on the play so he didn’t have a choice.

Tomorrow we are changing over to the new redesigned Boys of Spring website…Same address, different look. Let us know how you like it. We’ll be working out some of the bugs for a few days I’m sure, but the Boys of Spring are ready to rock-n-roll for Cubs spring training! They say a strong possibility of rain here in Mesa tomorrow so we may not have any practice at Fitch…I guess it’s better to get the rain out of the way now then later when the games start at Hohokam. T

It was a cool 49 degrees when practice started today

Reed Johnson in the house

Mikey and The Game

It’s all about the fun in spring 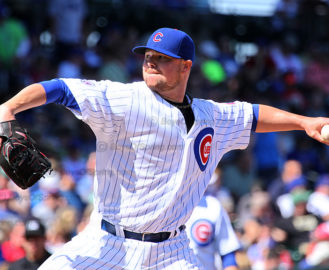 The Thing About Spring

The Cubs haven't won a spring game yet, the record is 0-2-1 at this point...I hope that doesn't disappoint you, because as a famous Cubs fan once said in the movie Meatballs...

I’ll write more later, but I just wanted to let you see Jorge… 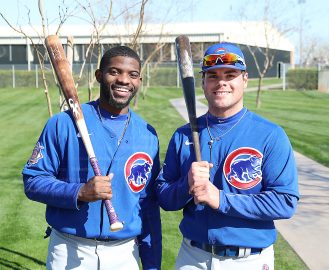 The Boys Of Spring (and Summer)

Baseball is already happening at the Sloan Park complex.

Dempster in action at Fitch Park Yesterday, I decided not to make the…