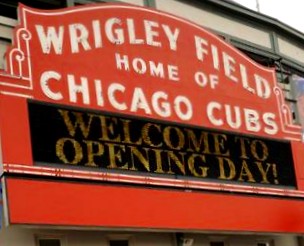 Sure I could try to wax poetic about the beauty of this day and all, but I’m not very poetic, and hate waxing. I could also go through a laundry list of things that were different this spring than in the past with this Cubs ballclub, but I won’t. Instead, I’m going to go back to my first time hearing manager Dale Sveum talk to the team. This was January 30th 2012 at Fitch Park, before pitchers and catchers reported. They were mostly minor league players at Fitch that day, but I think what Sveum said really signaled a new era in Chicago Cubs baseball on the field. A new style of play, a new mantra if you will, called The Cubs Way. I was the only person there (outside of the team) that day, here is some of what Sveum said to the players:

The fact that this was the earliest I have ever seen a manager show up and work with the players before the mandatory report dates, says something about Dale Sveum and his staff. They don’t just talk, they walk the walk. I think that is of major importance in starting this new Cubs philosophy, that you have a staff who are dedicated to doing things the right way.

Theo Epstein and GM Jed Hoyer have preached patience as the team moves forward, that is likely a good way to view this season. The pundits and media don’t expect much from this Cubs 2012 squad, and with good reason, considering last season and no big additions like Pujols or Fielder. The Cubs are likely starting the season with some of their best players in Iowa at Triple-A, Brett Jackson and Anthony Rizzo in particular. But this is the patient approach, and likely the best course for now. They say Rome wasn’t built in a day, and the Cubs drought of World Series titles spans over a century, so a little patience seems doable.

I have a feeling the Cubs team starting today’s game will be vastly different than the one you will see come September. However you look at this ballclub, they seem to have a different attitude now than anytime in my past 29 springs watching them in Mesa. As I told a friend the other day, “even if this team isn’t winning consistently this year, I would much rather watch a Cubs club that hustles, plays good defense, does things the right way, and seems to care. Than a team, like many in recent years who seem indifferent or just going through the motions.” That alone will be refreshing. This may not be a World Series capable team just yet, but having a smart, dedicated group running the show and acquiring talent, bodes well for the Cubs future.

I’ll be putting up a new winner of our 2012 BOS-BCS Awards each day until they are all revealed.

Cubs win in bottom of the 9th

Sorry about the lateness of this blog, but I stopped off at Sluggo’s…

Cubs in Vegas, Chicago in Mesa

If you are not going to Vegas over the weekend, you might want to check out Chicago Fest at Mesa Riverview (next to Cubs Park).

The Cubs lost to the Angels 4-0 in Tempe today. Click here to…