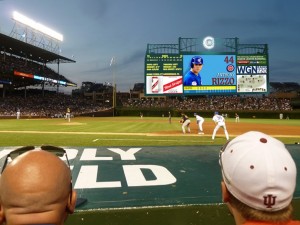 The Cubs home opener is today (weather permitting), what if you got into Wrigley Field and saw this? This is a photoshopped image of a new videoboard/jumbotron in Wrigley’s left field from Tim Souers over at Cubby-Blue. By the way, this is not an official rendering, just Tim doing his thing. No doubt, it’s an interesting look and visual. Some would say a board like this would destroy the unique feel of Wrigley Field. I would ask, if it helps the Cubs to win a World Series, would it be worth it? With the proposed Wrigley renovations currently in the spotlight, the image makes for an interesting discussion.

We have one week of regular season play in the books for the Cubs with a 2-4 record, and a new closer in Kyuji Fujikawa. There has been some good starting pitching (Shark looking strong), mostly solid defense, and some power from the big Rizz at first. However, as Len Kasper told me on that final spring day at Hohokam, he has concerns that this team can score enough runs. With 10 Cubs position players currently hitting .200 or lower, scoring runs will be one of the challenges. We’ll see if the bats can heat up with a little home cooking now that they are back in Chicago.

In my last blog after the final Cubs spring game at Hohokam I mentioned writing about my memories of Hohokam Park. Obviously that didn’t happen. Many people asked me on that final day, if I was sad, or had a bittersweet feeling? Honestly, I wasn’t sad, and didn’t feel bittersweet. So I tried to figure out why those emotions were not there. I couldn’t come up with an easy answer, but some clues came forward.

During the final Cubs game at Hohokam I was thinking more about a new beginning, than an ending. A new state-of-the-art spring training complex will be ready for fans and the team next spring (December actually), and it’s only a few miles from Hohokam. It’s also not as if Hohokam was headed to the wrecking ball, it’s going to be refurbished and the Oakland A’s will start playing there in 2015. Again, a new beginning for Cactus League fans, who will soon have two teams playing spring ball in Mesa.

I do have many great memories from Hohokam Stadium and the old Hohokam Park before that, some of those I mentioned in this Vine Line article. If I made a list of my fun Hoho memories it would certainly be extensive. However, it wouldn’t be about spring training games or who won or lost, but rather about people. I’ve made innumerable friendships over the 30 years I’ve announced the spring games for the Cubs. Thinking of all the great people I’ve met and the friendships made, put a smile on my face that final day at Hohokam. Sad or bittersweet…nope, excited about the future, and looking forward to seeing friends at the new Cubs facility next spring!

Closer But Still A Loss

Garza today The Cubs and the Giants squared off in Mesa today, with…

Don’t worry about wins and losses…yet.

The Cubs came up short in their final home game at Hohokam Stadium, losing 6-4 to the Seattle Mariners in front of 11,635 in attendance. 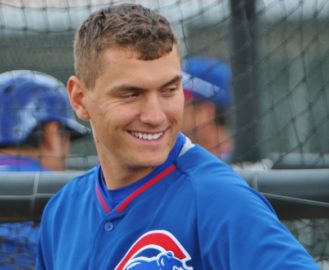 There are a few fan videos on the net of Bryant's HR, but I think you'll get a good feel from this video I shot and edited.