Wishing you all happy holidays, the New Year is upon us and that means spring training is right around the corner!

As I have mentioned before, Fitch Park is a great place to watch the Cubs before the games start at Hohokam Stadium. The report dates for the Cubs arrival at Fitch are:

Pitchers and Catchers, February 14 with their first workout the following day.

Some exciting changes are coming to Hohokam this spring, first and foremost better food! At least I expect it to be better, certainly there will be more choices available as Ovations a new concession company arrives this spring. Those of you who are spring training season ticket holders already know this as you were mailed the Hungry Fan Map to the ballpark. (See map below)

Ovations is part of Comcast Spectacor which is majority controlled by Comcast Corp which owns Comcast SportsNet which owns broadcast rights to the Cubs, White Sox, Bulls and Blackhawks. Ok, did you get all that? Bottom Line is, this is one big company that also owns E! Entertainment Network, The Style Network, The Golf Channel, as well as the Philadelphia Flyers and 76ers. Comcast as many of you know is headquartered out of Philadelphia PA, so that explains why there will be a Philly Grill cart at Hohokam this spring.

Other new developments you will see at Hohokam this spring are improved Cubs merchandise stores, 2 new auxiliary scoreboards installed over the 1st and 3rd base patio areas so you can see a scoreboard from any location in the stadium. And a brand new state of art main scoreboard said to cost over $500,000 which is more than the entire price tag of building old Hohokam Park in 1977. Thanks to David Dunne, Hohokam Stadium Manager for giving me the skinny on all the upgrades we’ll see at the ballpark this year.

Have a safe holiday!

This is the part that is supposed to be the "hook", so click and read the rest of this riveting rundown on today's Cubs game.

The Cubs showed their drawing power as nearly 20,000 fans attended a Cubs… 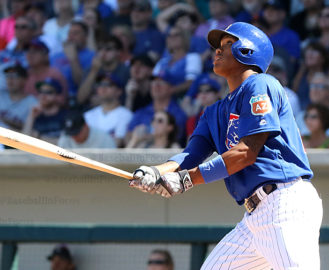 The Cubs lost a slug fest to the Mariners 12-9 yesterday at a sold-out Sloan Park...