The Cubs came from behind with 2 runs in the 9th inning to beat the Kansas City Royals 6-5, in front of 12,772 sun-drenched fans in Mesa. The comeback runs were supplied by consecutive hits from Felix Pie, Ronny Cedeno, and Casey McGehee.

Cedeno only played the final four innings, but his bat went to work immediately. He hit a single in the 6th, a double in the 7th, and the game-tying RBI triple in the 9th. Aramis Ramirez hit an opposite field HR in the Cubs 3-run 6th inning. Mark DeRosa had a RBI triple in the 2nd. Frightening moment for all watching, after drawing a walk Fukudome stole 2nd base but on the throw was hit with the ball thrown by Royals catcher Matt Tupman. It looked like Dome was hit in the face with the ball as he slid into 2nd. I’m glad my mic. wasn’t on when that happened because the crowd might not have appreciated hearing “Oh, #@*%!” over the PA, although many of them were probably thinking or saying the same thing. Turns out Dome was hit in the neck/shoulder area and appeared to be okay, although Eric Patterson came in and pinch ran for him.

Every Cubs pitcher pitched well, except for Tim Lahey who gave up 4 of the Royals 5 runs in the 7th inning. Starter Jason Marquis allowed 1 run in the 1st and nothing after that in his 5 innings. Scott Eyre threw a scoreless sixth. Jose Ascanio and Kevin Hart recorded 1-2-3 innings in the 8th and 9th respectively. Hart has looked especially good this spring, and has most likely locked up a spot in the bullpen.

The Georges talking pine tar and politics…just a guess.

A couple of well-known Georges at Hohokam today-Hall of Fame member George Brett with the Royals, and Pulitzer Prize winning writer George Will. George Will, an Illinois native and known Cubs fan, was seated in the 1st row just off the Cubs dugout sporting what looked to be a new Cubs ballcap. A foul ball hit by Geovany Soto in the 6th partially shattered the top window of the booth in which Len Kasper and Bob Brenly sit, they were announcing today’s game for Comcast Sportsnet. The Central Illinois Cubs Booster Club sang the 7th inning stretch today, doing a great job as they do every spring.

I had the opportunity to talk with Ron Santo this past weekend, he… 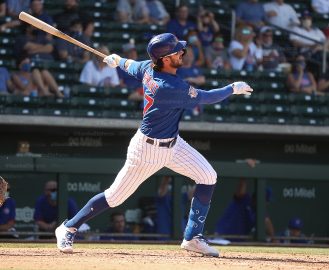 Win Two and Be One

Here’s the beauty of things as they stand right now, if the Cubs…