It’s been a while since I’ve blogged and quite frankly considering the Cubs season in 2011, leaving the ’10’ and Ron Santo statue photo as my last entry seemed appropriate. However time marches on and as Cubs fans we do what we are good at – we look to the future. That future it seems just got a bit brighter with the Cubs landing Theo Epstein to replace exiled GM Jim Hendry. The Cubs getting Epstein is a big deal and comes with at a price of somewhere between $15-20 million for 5 years and whatever player compensation the Cubs may need to give the Red Sox for snatching Epstein away from the last year on his Beantown contract.

What this really means is a new long term direction for the Chicago Cubs with a successful new age baseball man in charge. By “new age” I don’t mean some type of spacey music. The best thing to do is let Theo explain some of his thoughts on player evaluation in the video below. Credit to Matt Clapp of The Friendly Blogfines for tweeting this video today.

Of course now we must see where this leads in terms of the Cubs Manager. Mike Quade has a year left on his contract but it seems unlikely that Epstein won’t make an immediate impression by bringing in a new manager. Former Red Sox Manager Terry Francona is an interesting possibility. However with new allegations of issues with pain killers and marital problems affecting his job this season, the Cubs may be hesitant. However, Boston’s WEEI’s sports talk radio team Mut and Merloni say the Francona allegations smell like a smear campaign by the Sox ownership to push blame for the team’s epic failure in September on the former Manager. Of course the other big name candidate for potential future Cubs Manager is Hall of Famer Ryne Sandberg. According to sources Epstein wanted to hire Sandberg last season to manage the Red Sox AAA ballclub, if so, he obviously holds the Cubs icon in high regard. 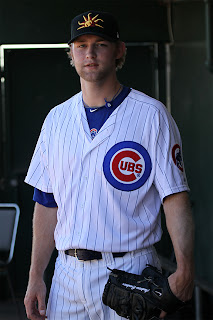 I give a cautious grin towards next season while seeing Andrew Cashner hit 100 mph on the gun at his Fall League game Tuesday while pitching a scoreless inning for the Mesa Solar Sox. Here’s a photo of Cash from yesterday shot by BOS’s John Antonoff.

The Arizona Board of Regents approved the move of the ASU Sun Devil baseball team from longtime home of Packard Stadium to the Cubs future Spring training complex. According to this article ASU will enter into a 30-year facility use agreement with the Cubs at their $100 million spring training facility near the current Riverview Park in Mesa. ASU is expected to begin playing in the new complex in 2014.

The City of Mesa has also released almost 200 pages of documents outlining how the new Cubs spring training complex will be governed and developed. Here’s an article with some of the details and here are the actual documents.

As for me, I’ve been working on Boys of Spring – The Movie in preparation for it’s release this coming spring. I’ll be posting more on that here as we continue to work on the final edit, as well as posting video clips and other news about the film.