I was over at my mom’s house yesterday for Easter dinner, while some of us were standing around munching some appetizers and chatting I noticed her chandelier was swinging from side to side. The sliding glass door was open but we didn’t feel any breeze that could have been making it move. My mom’s friend Chuck said maybe there was an earthquake, my niece said maybe it’s ghosts. A few minutes later she got a text from a friend saying that there had been an earthquake in Baja, Mexico area and that their pool in AZ had been sloshing from side to side. Never felt or even heard of anything like that here in the Phoenix area…very strange.

The Cubs finished the weekend with Friday and Saturday games here in AZ then headed off to Atlanta. Now it’s finally time – the start of another baseball season, and I’m really pretty optimistic about the Cubs this year.

Some nice things came out of this spring training, the emergence of Tyler Colvin and Starlin Castro, solid pitching from youngsters Caridad, Russell, and Berg, slim and in shape Geo and Z, and what appears to be a good clubhouse mix. However, doing it in the spring is vastly different than the regular season and the pressure is now ratcheted up 10 fold.

How will these young pitchers do when they hit the big stadiums and bright spotlights? Will Colvin’s bat cool while on the bench? Is Z really going to settle down a bit and have a big year? Can Soriano get his bat going again, will Dome be better at the plate now that he’s back in right field? Can slimmer Geo forget last season show us the ROY type Geo? These are but a few questions that need to be answered and the Cubs now have 162 games in which to do it.

After watching the team for the past month and a half I have drawn some conclusions (not from wins/losses or stats) but from my own observations and baseball knowledge and I’ll mention a few of those thoughts here.

I think Big Z is going to have a fine year (if he stays healthy) it is at this age (28 turning 29 June 1) that many outstanding MLB pitchers really came into their own. Randy Johnson is one example who found his stride about this time having never won more than 14 games until 29 years old, then had a 19-8 breakout season. John Smoltz was a good consistent pitcher like Z in his younger days but also never won more than 15 in a season until he turned 29 years old then went 24-8 and won the Cy Young award. This is about the age when the athletes body is in top shape and the knowledge and maturity it takes to be a top pitcher line up together.

The Cubs pitching rotation has some good arms and depth, I think Randy Wells is the real deal. He has the pitches and right temperament to be consistent over the long season. Along with Dempster and Lilly (provided he’s the Theo of old) the Cubs have a nice solid if not spectacular top 4. Gorzelanny and Silva provide nice depth. When Silva showed up at Fitch a bit larger than expected most Cubs fans including me kind of wrote him off as a non-factor this season. Silva to his credit has just worked hard and did what he had to do and may actually give the team a plus out of the Milton Bradley trade.

The young kids in the pen will be some of the most interesting players to watch as we move though the early phase of the season. A lot is riding on these untested arms of Caridad, Russell, and Berg as well as Jeff Samardzija who is relatively green with only 30 MLB innings under his belt. Sean Marshall was outstanding this spring and the lanky lefty is versatile with the ability to come out of the pen and spot start when needed. Marshall’s breaking ball was looking good this spring.

Carlos Marmol has everything needed to be a top level closer, he was a bit inconsistent this spring but settled down nicely at the end of camp. If he starts the season with confidence and consistency he could give the Cubs a tough closer for years to come. That being said, he’s still one of the question marks coming into the season. My opinion is, Marmol will be a good fit as the closer.

The Cubs were down substantially in runs scored last year from 2008 and they won’t likely get all that scoring back but they will be a solid run scoring team this year. Without going through the whole lineup player by player what is most needed this year is a bounce back from Soriano and Soto at the plate and healthy season from Ramirez. If those three things come close to happening the Cubs will plate plenty of runs. Marlon Byrd should add a nice mid-end of line up bat along with playing solid CF.

The Cubs have much better depth and talent off the bench this year with Chad Tracy, Colvin, Nady, and Baker/Fontonot platoon situation. If the middle infield is inconsistent or has an injury situation the Cubs have a potential star in Starlin Castro waiting in the wings at Iowa.

The most important changes to the Cubs this season may be the addition of new staff members Rudy Jaramillo and Greg Maddux. It’s harder to evaluate the impact of these guys but the players seemed to really respect and value the knowledge that these two bring to the table.

The Cubs aren’t pegged by most experts as the divisional favorite at this point and that’s probably accurate and a good thing as we start the season. However if the Cubs start getting positive answers to some of these season opening questions they could definitely be a challenger this year. I like the attitude of this team and the workman like way they go about their business. This isn’t a glamor type team but it is a talented group and how they jell as a “team” will be a big factor in this years success.

I’m always a bit sad when the Cubs leave AZ, mainly for selfish reasons (being around the team on a regular basis) but I’m always more happy to start a new season. This year the Cubs don’t have the big expectations as they’ve had in recent years but from my way of looking at it, that is probably the type of year when they just might win it all…Not saying they’re going to win it all this year, just that it probably will happen in a season like this when nobody is really expecting it. Hey, why not this year?

The Hair and LaHair

The Eagle has landed, with the arrival of the Cubs equipment truck this… 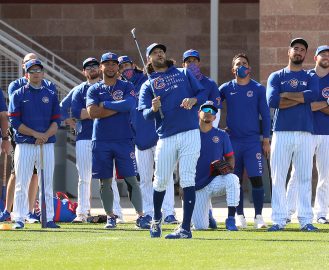 Goldfield Ghost Town sits under the Superstition Mountains Yesterday the Cubs had the day off,…

Cubs Bomb Away at Muni