Yesterday the Cubs released artist renderings of the proposed new stadium and complex they wish to build at the Riverview site in Mesa (all 5 renderings shown here are of that site). I would be lying if I tried to give an unbiased even handed review of what the City of Mesa and Cubs hope to build and why Mesa voters should vote “YES” on the upcoming Proposition 420…I’m much to close to the whole situation to do that. Here is an article that explains.the project in much greater detail than I could. 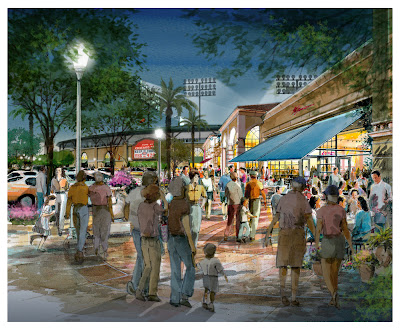 When the three sites were originally proposed (1.Riverview Park, 2. Downtown Mesa, and 3. East Mesa – 202 & Recker Rd.) I was in favor of the East Mesa site, mainly because it is much closer to where I live. It also would have arguably the most impressive backdrop of any spring stadium with Mesa’s Red Mountain perched majestically beyond the fences. This site probably would be the easiest to develop in terms of the most vacant build-able land. It is furthest away from the valley population centers but has good freeway access off the 202 freeway. Of course with the Cubs I think it’s really true- “If you build it they will come”.

The downtown site was favored by some of the Mesa political establishment with hopes of reviving the dormant downtown area but the site had many issues that the Cubs didn’t want to deal with including poor access and lower income demographics. You can see the pros and cons on the original three sites outlined in a study available here.

The Riverview site is the one that the Cubs have zeroed in on and for good reason, it would be by far the most viable and accessible location. This site isn’t without issues however, including the fact it would be situated right next to the Mesa Northwest Water Reclamation Plant (not seen in the artist renderings). . The air here can be less than sweet smelling at times, I guess the aroma from the concession stands would ease this pungent problem. 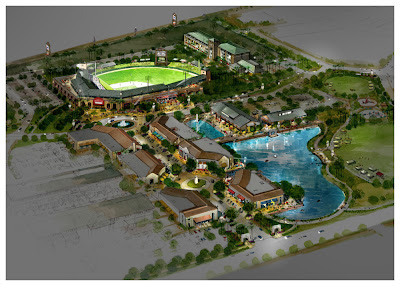 The renderings look fantastic, like all renderings do but there is much to be done to make this happen including an important Mesa vote on Prop 420 in November. Section 613 of the Mesa city charter requires a public vote for any spending on entertainment, sports or convention facilities over $1.5 million.

Some people ask, why build a multi-million dollar facility for a handful of games in March?  I’m not trying to sway people to vote “YES” on Prop 420 but this question is one of the misconceptions that I hear. The proposed new facility would be a year around Western headquarters for the Cubs, including minor league operations, player development and rehab center. My understanding is that the multiple practice fields would be available for public use as well. The Cubs will lead the way in developing the Wrigleyville retail areas with restaurants, bars, shopping, and hotel around the stadium. Another potential part of the complex could be a museum on Cactus League history that would house the outstanding exhibit, Play Ball – The Cactus League Experience. which is currently located at the Arizona Museum for Youth.

From a fan standpoint the new complex would help keep the team competitive in player development and attracting free agent talent, as well as give fans a better spring training experience and in the end help the Cubs chances for long term success.  Of course if Prop 420 doesn’t pass this could happen in Florida and not Arizona. The Cubs and Arizona have had a nearly 60 year mutually benefitial relationship, I hope Mesa voters understand the significance of the Cubs in terms of benefits for our city and state. OK, maybe I am trying to sway voters to vote “YES” on Prop 420 but as I said right off the top, I’m a bit biased. 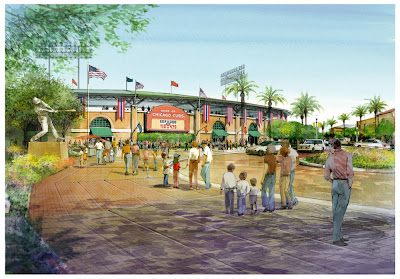 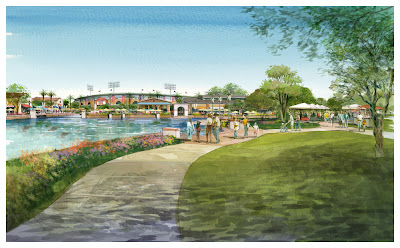 So I reported to Fitch Park this morning, had my physical, did the…