Theo Epstein and the rest of the Cubs baseball operations brain trust are here in Mesa now, they are in meetings both today and tomorrow. That means not much happening out on the fields at Fitch Park. I offered to pitch bp, and hit infield/outfield, but I was told I might be better suited helping the grounds crew rake the infield. So instead I figured I would write about one of the young guys trying to make an impact this spring.

Jeff Beliveau is not an unknown considering he was the Cub organization’s minor league pitcher of the year in 2011, but Beliveau (pronounced BELL-eh-voh) also has not pitched above the Double-A level . That is very likely to change this year, the question is will he make a stop in Iowa or leap Triple-A altogether? Some have speculated Beliveau could be part of the compensation to the Red Sox for Theo Epstein but I’ve also heard Theo really likes the lefty. The Cubs new regime seems to be good at the cat and mouse games when dealing with potential trades and personnel moves, so it wouldn’t be out of the realm of possibility that Theo is letting the Red Sox think he really likes and wants Beliveau, when in reality he really wants J.B. to be the compensation. OK, that type of reverse psychology thinking is making my brain hurt. Let’s talk about Jeff Beliveau and what he offers the Chicago Cubs.

The Cubs minor league pitcher of the year was downright dominating last season, owning a 1.57 ERA in 53 relief appearances between Single-A Daytona and Double-A Tennessee, his first career stop at Double-A. In Tennessee he went 6-1 with three saves, and held left-handed hitters to a .169 batting average.
The 6’1″ southpaw has a low-to-mid 90’s fastball to go with an outstanding change-up and great control. In 2011 Beliveau walked 19 batters while striking out 89 in 74.1 innings leading to a 0.928 WHIP. Having great control wasn’t always the case, in college at Florida Atlantic in 2008 he pitched 76.2 innings and walked 77 batters, with a 4.58 ERA. Those numbers are part of why he lasted until the 18th round of the 2008 draft when the Cubs picked him. 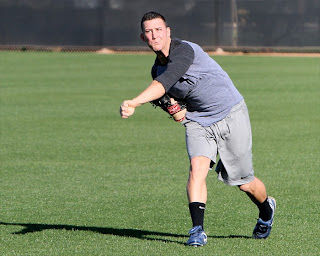 The control Beliveau has shown in the minor leagues can be attributed to the greater control of his overall body. In the early part of his 4 minor league seasons with the Cubs organization the now 25 year old was listed weighing as much as 215 lbs., he is now listed at 190 lbs. How did the change come about? MMA and preparing for the Octagon of course. Well not exactly, Jeff’s brother was working to become a Mixed Martial Arts Fighter and in order to get in better shape he joined his brother’s workouts. Workouts that included fast paced drills mixed with wrestling, heavy bag work, along with push ups, and pull ups. The result was a weight loss of 20 pounds and far greater body control, which he credits in helping his pitching.

Beliveau may not be ready to go into the octagon but he looks in great physical shape to hit the mound. He’ll be a player to watch this spring as he attempts to make his move up the Cubs pitching chart. I’ve been watching him here at Fitch Park recently and it’s obvious he’s got a very live arm. The Cubs reportedly asked him last season to work on throwing more sliders (especially to left-handed batters), the results have been very positive. Beliveau will be competing for a spot as a lefty out of the pen, likely behind James Russell. His competition for that job (at least as a lefty) is former Cardinal Trever Miller who at 38 years old is a non-roster invitee. Scott Maine and John Gaub are in the mix, both pitched well at Iowa last year but combined they have just over 20 MLB innings under their belt. The Cubs are likely to let Beliveau get some seasoning in Triple-A this year, but he could be a surprise to make the team if he pitches well this spring. 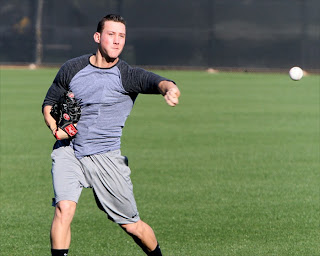 We Needed a Fuku-Dome Today

Byrd on a Flight of Fancy?