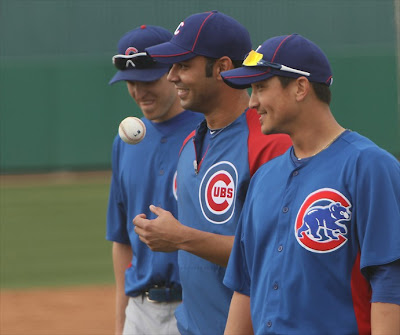 We had overcast skies by the time the Cubs hit the fields at Fitch Park this morning, but the temperature was pleasant with a high in the mid to upper 60s and no wind.  Just about perfect conditions for baseball. One of the things I’ve noticed in the four days of practice under Mike Quade is the upbeat feel at Fitch. The players as well as the coaching staff seem genuinely happy to be here.

One of those happy players is Carlos Pena, who seems to be constantly smiling, I’m sure it’s in his nature but he appears thrilled to be a Cub. Now if he can hit his weight, Cubs fans will be happy he is too. Pena is an outstanding defensive first baseman but the Cubs are looking for his backup at first. Today we got the chance to watch Tyler Colvin play extensive infield at first, nice to see Tyler looking smooth with the glove. I talked to him briefly after practice and he said he felt pretty comfortable there and is a work in progress at first. 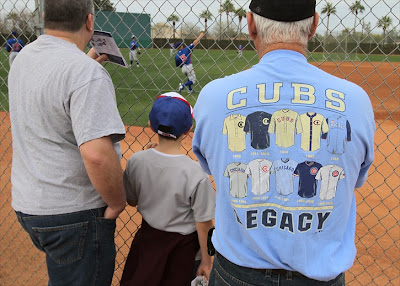 The Cubs have put some special dates on the spring calendar, which include a Ron Santo Tribute Day on March 10th when the Cubs host the Cleveland Indians at Hohokam.  There’s also a “Thank You to Mesa and Fans” on March 7th for helping the Cubs pass Proposition 420. This will allow the Cubs to stay in Mesa for the long term with a new spring training complex to be ready by 2014. The opening game on February 27th is also Little League Day when the Cubs will be bringing in somewhere in the neighborhood of 400 Little Leaguers to the game. I’ll get you more on these festivities as I find out more info.

According the weatherman, we may have rain over the weekend here, so if you’re unable to see the Cubs due to the conditions, be sure to drop by the new opening of Play Ball The Cactus League Experience at the Arizona Historical Society in Tempe. Even if it doesn’t rain you can drop by the museum and see the exhibit after the Cubs morning practice. This is Play Ball’s third season and opens a new location at Papago Park and Phoenix Sky Harbor Airport. By all accounts the Papago exhibit is by far the best yet with plenty of new items you won’t see anywhere else in America. I’ve helped out a bit with this project and donated some items to the new exhibit, so I’m very excited to see it.

Here are some of my photos from today, also with some shots of the people who make the Chicago Cubs possible, the fans. 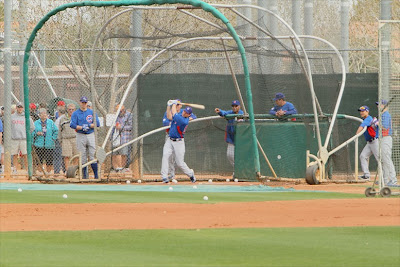 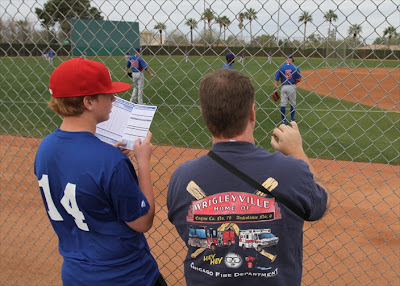 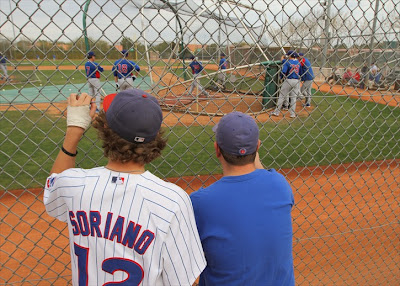 Sure spring training is sun and fun for the fans, but it really…

Wells A beautiful day in Mesa, a hazy sky and temperatures in the…