A very fast(2:17) and well played game at Hohokam today, as the Cubs lost to the Angels 3-2 in front of 12,727. Cubs starter Ted Lilly had his best outing this spring, going 6 innings not giving up a run, 4 hits, 4 K’s, and 1 BB. Angel’s pitcher Irvin Santana retired the Cubs in order the first 4 innings. Cliff Floyd led off the 5th, hitting a monster HR to right field, giving the Cubs a 1-0 lead that would stand until the Angel’s half of the 7th, when Kerry Wood entered the game and gave up 3 runs on 3 hits, and a homerun. Wuertz and Dempster each pitched a scoreless inning. The Cubs had some outstanding glove work today, including a great leaping grab on the warning track by Jacque Jones, and Mark DeRosa who started at 3rd Base in place of Aramis Ramirez today did his best Brooks Robinson imitation. It was a great day for a ballgame in spite of the Cubs losing, hopefully you saw it live at Hohokam, or on WGN TV.

A few stats this spring:

Cubs starting pitchers have walked 2 or fewer in 24 of the 26 games this season.

Cubs 30 homeruns entering today’s game are 2nd in the NL behind San Diego’s 36.

The team holds a .496 slugging % coming into today’s game, leading the NL.

Cubs hitters are averaging nearly 4 walks per game this spring, after averaging a mere 2.4 during the 2006 regular season.

Derrek Lee has reached base safely in 15 of 16 games played. His .490 batting average leads the Majors.

Cubs have stolen 25 bases this spring, and only been caught 3 times. 25 stolen bases ranks 3rd among NL Clubs. The Cub’s .893 success rate in stolen bases leads the Majors.

Cubs have 12 sacrifice bunts this spring, leading the NL. 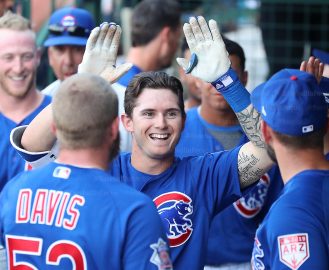 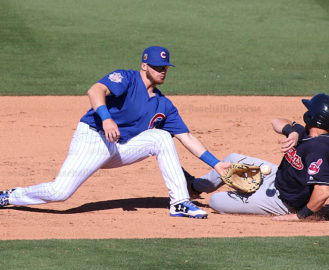 It seems more celeb types are hanging around Sloan Park this spring, now that our boys are champions.

Pops and Me go to Wrigley