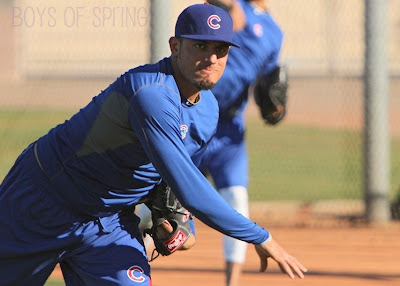 If you haven’t been following BOS on Twitter, here are some pics I posted over the past couple days. One of the photos shot yesterday is of new Cubs pitcher Matt Garza, and is to my knowledge the first pic of Garza throwing a baseball in Cubs blue anywhere on the net.

The other pic from yesterday was of Randy Wells wearing a Wade Bowen T-shirt, Bowen and his band played at Joe’s Bar on Weed St. in Chicago last night. Randy Tweeted yesterday to Cubs nation – get out and see Wade if you are in Chicago. Word is Bowen’s gig was outstanding with a large crowd, power of the Twitter, or should it be the tweeters? I shot that pic of Randy while he and Justin Berg took a break from a tough workout at Fitch and had some fun with a field goal kicking contest. I don’t think there was an official winner but both guys looked like they knew what they were doing. 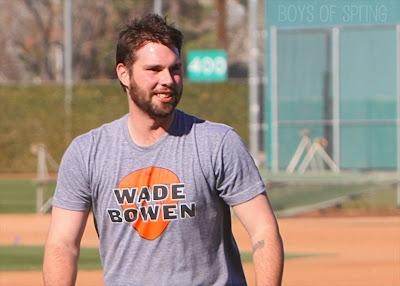 The first tweeted pic was of Marlon Byrd running. Byrd was working with Tyler Colvin the other day on base-running skills. Marlon as most of you know is a helpful team player and was showing Tyler some new running drills and tips. Byrd indicated the Cubs outfielders are going to be running more on the bases this season (of course we always hear that at this time of year). However, today’s action at Fitch may indicate the Cubs are serious about running more. Marlon was working with a world class sprinting coach and doing some exercises that I’ve never seen anywhere. What’s interesting but not surprising is Byrd working on his running a full week before full-squad workouts are mandatory on a Saturday. Byrd’s specialist at Fitch is a highly regarded track and sprint instructor who has delivered gold medals for many of his protégées. I’ll be happy with a few more stolen bases. Some players are always looking to improve and will sacrifice to do so. 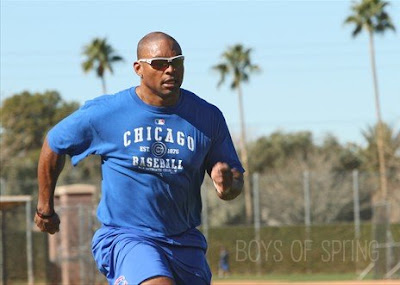 Pitchers and catchers report tomorrow, with the first workout on Monday. Cubs spring training is upon us and BOS will be your eyes and ears here in AZ. Tomorrow, I’ll recap Camp Colvin and give my thoughts on some of the players I’ve watched over the last weeks. I’ll also post some of my favorite pics.

Let’s Take a Break and Be in a Movie

Back to the Desert

Reversing previous bad habits, a losing mentality, curses, and nearly a century of… 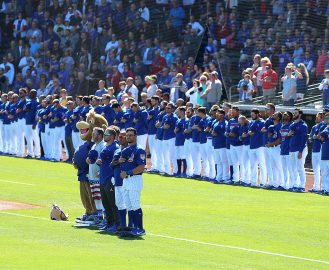 One thing I've noticed at Cubs camp this spring is focus and determination...