Today’s Cubs practice at Hohokam before tomorrow’s spring opener was conducted under mostly cloudy sky’s with little wind and pleasant mid to upper 60’s temperatures. The workout before the first game at Hohokam is one I always enjoy, it’s usually pretty low key and all the players are on one field (as opposed to 4 fields at Fitch). Only a few hundred (at most) fans today so plenty of room to roam around for the best views and get close to the players you want to watch. With nearly as many players as fans it was that intimate feel you always here about during spring training. Players cutting through the grandstands to the locker rooms (Dempster pic) and others just chatting with friends (Marmol pic). Here are some notes from today (photos as well).

Mike Quade is a fan of “The Coach” John Wooden and enjoys Wooden’s philosophical bent of “team”, while developing players mental and physical quickness. There’s a lot more to Wooden’s approach which is outlined in several books and includes his “pyramid of success”. It obviously worked well for the late coach at UCLA. I’m a fan of that mindset as well, while working on a documentary I witnessed the benefits following a high school football team from Arizona’s White Mountains. The coaching staff there strives to help each player become the best he can be, much like the Wooden approach through building industrious habits and stressing team over individual. The focus is less on beating an opponent and more about finding each players maximum effort and ability, then integrating it towards the team goals. The results during the time I followed this high school football team – 64 consecutive wins and 4 straight state titles.

Great to see Greg Maddux having an extended conversation with Cubs newcomer Matt Garza. I mentioned to longtime Cubs fan Mike Stoker that anytime I see a Cubs hurler getting some advice from the Mad Dog, it’s a good thing. 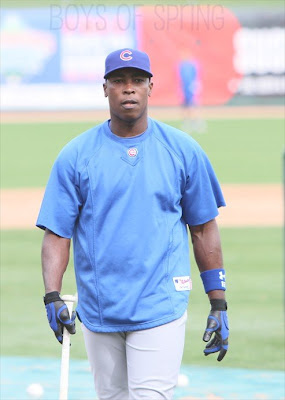 Alfonso Soriano looks like he has hit the weights this off-season as he looks very strong (see pic). The Cubs really need Fonz to bounce back this season and be a run producer.

I met Chicago native Alex LoCicero a student at the Illinois Center for Broadcasting at Hohokam today. Alex was nice enough to interview me for the school’s website SportsTownChicago.com. The right place at the right time can be helpful as I introduced the future broadcaster Alex, to Pat Hughes and Keith Moreland who were going over notes for their first broadcast. Moreland might be a little nervous tomorrow as expected taking over for Ron Santo but said he is very excited about the opportunity and being a part of the Cubs family. He has a great partner in Pat Hughes.

The team finished today’s practice with some base running drills. Starlin Castor is very quick and also looks stronger this spring. It will be interesting to see if he can improve his base-running, particularly his steal percentage having been thrown out 8 of 18 attempts in 2010.

Tomorrow starts it off, Cubs baseball my friends. It’s a whole new year!

Headed in the Right Direction

The Gang’s All Here

Many Questions, do the Cubs have Answers?