Another beautiful day in Mesa with plenty of sun and a high temp around 70 degrees. It looks like it will cool off a bit tomorrow with possible showers and a high of 60. Today was the usual pre-camp (Camp Bussie) workout for position players, weightlifting, bp, some fielding and running, Manager Dale Sveum and first base coach Dave McKay continue to lead the bp and infield/outfield drills. Cubs pitching coach Chris Bosio is now at Fitch overseeing the Cubs arms as they arrive on a daily basis. 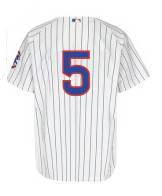 Apparently we get to see Yoenis Cespedes in the Cactus League pretty soon, just not in Cubs blue, as the Cuban outfielder is set to sign a big contract with the Oakland A’s. I never considered the Cubs serious about going after Cespedes considering the Cubs youth movement and his age of 26 (pending age verification) along with his lack of playing against top level competition. The younger Cuban outfield prospect Jorge Soler at 19 years old fits the Cubs game plan for the future.

Five more days until Cubs pitchers and catchers report here to Fitch Park in Mesa! Some of the past Cubs who have worn #5 include – Riggs Stephenson, Tony Taylor, and Lou Boudreau as Manager in 1960. More recently Nomar Garciaparra, Ronny Cedeno, Jake Fox, Sam Fuld, and now Reed Johnson.

Here are a few of my pics from today ~

All right I may as well come out and say, I was pretty…

Get a preview of the exciting new Cubs spring training facility with my photo essay.