Tough loss last night for the Cubs but the winning streak sure was fun to watch. I liked what Lou Piniella said after the game last night: “We had a nine-game winning streak, we’ve been playing good baseball…give their team credit for pitching well. Hopefully tomorrow we’ll get another good game from [Ryan] Dempster and start a new streak — a win streak, that is.”

Today as part of the 2008 First-Year Player Draft, Major League Baseball will hold a ceremonial selection of players from the Negro Leagues. Participation in the draft is voluntary, but most clubs are expected to take part as baseball continues its efforts to keep alive the history of the Negro Leagues. The Cubs will select Detroit Stars pitcher/first baseman Walt Owens who played in the Negro Leagues from 1953-55 and with the all-white Detroit Pepsi-Cola team when baseball integrated in Detroit in 1957. In doing a bit of research I found what Owens accomplished off the diamond was as impressive as anything he did as a ballplayer. “A teacher for 54 years, with 34 years at Northern Illinois, Owens has been a pioneer in many aspects of his life.”

In the spring 2006 I had the opportunity to interview Negro League legend Buck O’Neil for the Boys of Spring documentary, here is a portion of that interview. O’Neil was hired by the Cubs as a scout from the Negro Leagues in 1955. This clip is 2 minutes. 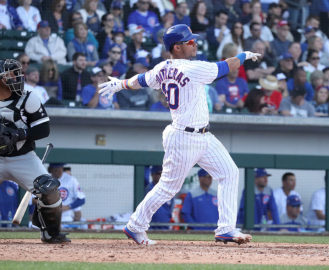 Among the amazing inductees was Yosh Kawano, the longtime Cubs Clubhouse Manager

Now that I have your attention, nothing new to report on the duo.…

Fly on the Wall