A baseball legend was born on this day in 1919, Jack Roosevelt Robinson. Jackie Robinson would be turning 92 today, he passed away at the age of 53 in 1972. In his immortal book “The Boys of Summer” Roger Kahn interviews Jackie not long before Robinson died, this climactic chapter is titled “The Lion at Dusk”. It paints a picture of the struggles Robinson had not just during the time he broke baseball’s segregation barrier but in his life after baseball. We’re all subject to our own family genetic code, but I have to believe everything that Jackie went through did not do him any favors longevity-wise. Conversely, Robinson paved the way for other black players to travel a less arduous path to the majors, players like Ernie Banks.

Another January 31st birthday is Mr. Cub – Best wishes to Ernie on reaching 80 years young!  Five years ago I interviewed the late Buck O’Neil who became the first African American coach in Major League baseball with the Cubs in 1962, and we got to talking about Ernie Banks. Buck told me that when Banks came up as a young ballplayer with the Cubs he was very quiet and soft spoken. O’Neil gave the kid some advice telling Ernie “Man you got to speak up here”. Buck then paused for effect, and said “and he hasn’t stopped yet!”. Robinson, Banks, and O’Neil all played for the Kansas City Monarchs and went on to break barriers. Here’s to Mr. Cub, “let’s play two!” (You can see part of my Buck O’Neil interview in a video on the BOS home or Media page.)

Ernie Banks is said to have inspired long-time Cubs fan Eddie Vedder to write his Cubs ode ‘All The Way’. Vedder was at the Randy Hundley Cubs fantasy camp all week here in Mesa and played in Saturday’s big game at Hohokam Park. I overheard Bobby Dernier in the on-deck circle saying he was going to hit one out to Vedder in centerfield, but Bobby ended up pulling it to left instead. It was also nice to see the #10 Santo jersey on the field as Ron’s son’s, Jeff and Ron Jr. participated in the camp. Below are some pics I took after Eddie hit an RBI single. 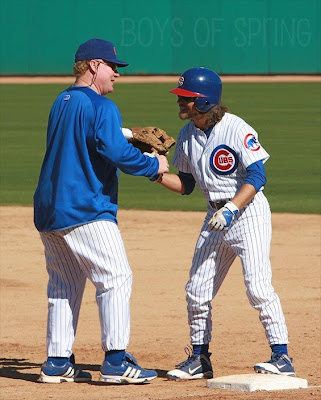 Eddie living his words, “We are one with the Cubs, like brothers in arms in the streets and the stands”.

Listen to Q and A from Cubs Fan Fest (Part 2) 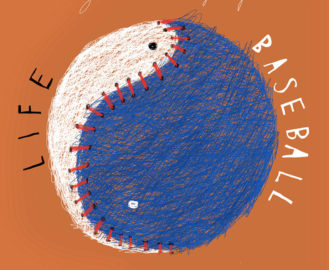 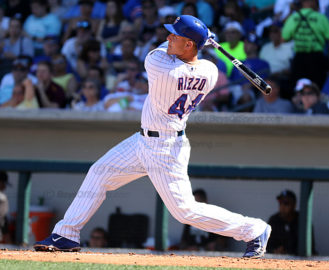