Anytime the Cubs beat the White Sox it’s a cause for celebration. They did that today in fine fashion 9-4 in front of a single game Cactus League attendance record audience of 13,327. The game started off at a cool (for Mesa) 60 degrees, but the Cubs bats came out hot as they plated 7 runs in the 1st inning on Sox starter Clayton Richard who couldn’t make it out of the 1st inning.

Carlos Zambrano pitched a steady if unspectacular 6 innings allowing 2 runs on 5 hits with 3 K’s and 2 BB’s. Angel Guzman gave up a HR to Brian Anderson, and Chad Fox pitching in the 9th allowed the other run. Luis Vizcaino pitched a scoreless inning.

Kosuke Fukudome made his first start in the Cactus League upon returning from Japan’s successful title defense of the WBC tourney. Dome promptly got a base hit to the delight of the Hohokam crowd. Uncle Milty went 1 for 2 and also got a couple free passes, it’s nice to have a guy who can hit for power, average, and a high OBP. Alfonso Soriano had a very effective 1st inning at the plate notching 2 hits in the first as the Cubs batted 11. Aaron Miles starting at 2nd base had a nice game going 3 for 4, Koyie Hill had a 2 RBI double in the Cubs big first. Derrek Lee also had a couple hits including a double.

Bradley made a sweet running grab and then fired a very strong throw, nearly doubling up the White Sox runner at first. Soriano made a nice running catch in the 4th although it probably shouldn’t have been as difficult; Soriano at first moved slowly and then as if he thought ‘hey, I could catch this’ turned up the speed to make the grab. White Sox centerfielder Jerry Owens robbed A-Ram of an extra base hit with a beautiful diving grab in right center.

We’re getting towards the end of spring training but it’s still a pretty relaxed time for players who know they’re going to be on a MLB roster. I’m guessing in a regular season game you won’t see White Sox pitcher Octavio Dotel jumping on the back of Bobby Jenks for a piggy back ride between innings walking across the infield to the bullpen as he did today. Today’s attendance record is probably going to stand until we break it again this season or most likely until next spring because the Cubs won’t play again at Camelback Ranch this spring. The only way that either the Dodgers or the White Sox can break the record at the Ranch is if they play the Cubs, so the record stays at Hohokam for at least another year.

Cubs travelling to Tucson tomorrow to take on the Rockies and back to Hohokam on Sunday where we’ll play the Cleveland Indians for the first time in Mesa. It’ll be good to see Mark DeRosa and Kerry Wood even if it is in a different uniform.

Those of you who have been following this blog for a while might remember that I have Irish ancestry. My dad's side is pretty much all Irish... 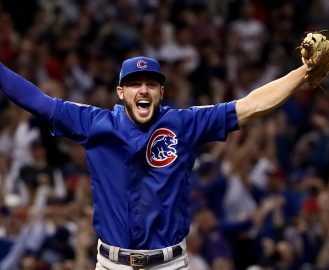 The Return of KB

KB is already here in Mesa working out at Sloan Park. He looks energized...

Of course I said last time I would blog more often, but as…