Happy President’s Day! Plenty of Cubs fans spent the holiday at Fitch Park this morning on a very pleasant sunny day. More Cubs position players also turned out on the second official practice for pitchers and catchers. Among the new arrivals were a shaved and clean-cut Brett Jackson (who at Cubs convention last month was looking a bit like Shaggy from Scooby Doo), new third baseman Ian Stewart, Jeff Baker, and the big Bryan LaHair.

Spring training stadiums and complexes are known to be fan friendly and generally smaller in scale than major league stadiums and facilities. These intimate environments are part of the unique charm of baseball at this time of year. The intimacy is very apparent the moment you step foot into Mesa’s Fitch Park where the Cubs train before the games start at Hohokam Stadium (which is about a half mile North on Center Street). As I entered Fitch Park, I realized that my daily morning coffee intake was now alerting me of a need to stop off at the Fitch Park men’s restroom. When I was about 30 feet from the door, a tall man came around the corner. As he entered the men’s room, I realized it was Cubs’ Manager Dale Sveum. Knowing there are only two urinals, I decided to wait until a bit later. After all, spring training intimacy only goes so far…and the John is definitely the wrong place for conversation.

Fitch Park is a throwback to another era with four diamonds emanating from a central area where you are mere steps from one diamond to the next. I had someone tell me today that they’ve been to little league complexes that are bigger and fancier than Fitch. Therein lies the charm, where Cubs players walk right by you from one diamond to the next and, even standing outside the fence, you can be only 10 feet from the on-deck circle. Next spring (2013) will be the last for the Cubs at Fitch and its spartan confines as the team leaves for a bigger, better, brand new complex at the current site of Mesa’s Riverview Park and Golf Course. The days of catching easy foul balls or bp home runs at the Cubs practice fields may be numbered.

Talking with longtime Cubs spring training ticket holders, many expressed concern that much of what they enjoy at Fitch will be lost with the new Cubs Wrigleyville West complex. They hope, as I do, that the Ricketts are able to meet the needs of a growing organization with a state of the art spring complex but still keep access for fans to watch practice and feel a closeness to the team.

After walking around and surveying the fields I decided to make my stop at the rest room. Sveum was long gone, but I had to say “excuse me” as I entered and passed the guy who was exiting — Cubs first base coach Dave McKay. This may not be part of the actual “charm” of spring training, but it does show the scale and “intimacy”.

Today Reed Johnson had his family sitting in the small aluminum bleachers at Fitch, Reed’s young son Tyce kept asking when daddy was going to be done. Everyone in the stands enjoyed hearing papa Reed assure his little fella a number of times that he would be done soon. This is Cubs spring training Fitch Park style, enjoy it while you can!

Here are a few of my photos from today.

Warning track this morning  As I have said many a times here before,… 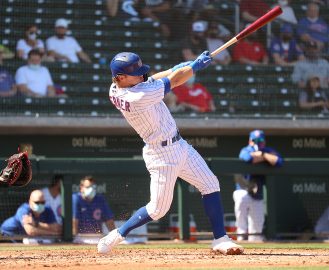 I’ve used this title before on a BOS blog, but it’s very appropriate…