Chicago Cubs pitchers and catchers took to the fields at in today under a sunny sky. As is often the case a few position players showed up early to get a jump on the spring season, I was a little surprised and very encouraged to see #12 out there. That’s right, Cubs free agent prize Alfonso Soriano (pic below) was among the early arrivals working on fielding and taking batting practice. For a player who signed a $136 million dollar contract Soriano’s under the radar early appearance is a big departure from the days of King Sosa. Sammy’s arrival to camp often a few days after the position players report date was treated as a royal event unto itself. Of course Soriano’s low profile today perhaps had more to do with the arrival of Carlos Zambano.

The “Big Z” spoke after practice today and the Fitch Press room was jammed, most likely you will hear and read all about it in many places, so I will just give you my condensed take on what he said. Zambrano feels he has already made big money, $6.5 million last year, but with the Barry Zito contract the door has been opened (and the market set). The Cubs have started negotiations and outlined some parameters, Z says he would be happy with a 5 year deal and would like to get it worked out before the season starts. If not he will worry about it after the season with the Cubs having first “priority”. He’s excited with all the changes to the ballclub, feels great physically, and thinks he could win 20 to 22 games this year. Zambrano called new teammates Lilly and Marquis “inning eaters” and believes the Cubs will be a contender this season, citing how the Detroit Tigers weren’t predicted to be as good last year and they went to the World Series.

Other impressions from today, Michael Barrett was hitting the cover off the ball in bp, I know it’s only bp but for the first day he was scorching one laser shot after another. Felix Pie was also in early, he and Soriano seemed to be getting along well, perhaps two thirds of a future outfield? The good news: Mark Prior and Wade Miller both throwing off the mound and feeling good. The bad news: A slimmer Kerry Wood (pic below) falling out of his hot tub hurting his ribs and will not throw for 4-5 days. (Insert your own joke here) Wood did participate in today’s entire workout except the throwing. Cubs pitching prospect and former golden dome multi-sport star Jeff Samardzija (pic below) already leads the team in one area–largest hair.

A slim Kerry Wood on mound

Congratulations to the 2010 World Series Champion San Francisco Giants!  It was a…

The Cubs lost to the Angels 4-0 in Tempe today. Click here to… 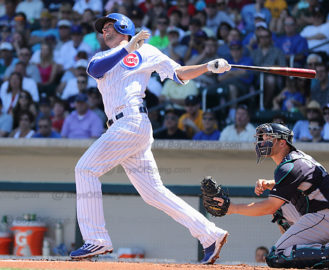