Cubs Blue-print for the Future

Today I had a chance to talk with Cubs President of Baseball Operations, Theo Epstein while watching the workouts at Fitch Park. He said he really enjoys the development aspect of finding and bringing young players up through the system. As I can attest, there was a different feeling in the Cubs most recent Instructional League here in AZ. A noticeable added energy and direction from the staff, which was evident in how the young players conducted themselves.

The Cubs minor league system needed to be overhauled for quite some time. Now they are on the rise, most notably seen with ESPN.com’s Keith Law ranking the Cubs system #5 in all of MLB. These type of rankings are certainly subjective, but it’s a good sign considering the Cubs have not been good at developing home grown talent for a while. Of course not all of the current talent was brought in by Epstein and company, but you can rest assured they will work tirelessly to find and keep a stream of top prospects in the pipeline.

What I’m seeing already this spring is the further implementation of the “Cubs Way”, a focus on things big and small, on and off the field. The blue-print in motion for all aspects needed to build a long-term competitive organization. For instance, all the scouts in the Cubs organization have been here at Fitch Park the last two days. I’ve never seen that before. I talked to Desi Wilson, who will be the Cubs AA Tennessee Smokies hitting coach this season. He told me that every staff member in the entire organization is now on the same page with how they want each batter to approach hitting. Everything is now done system wide, top to bottom. 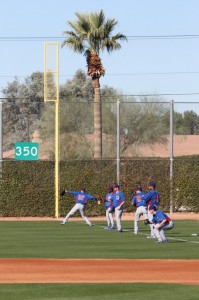 The Ricketts are doing what it takes to bring sustained success, adding new first class baseball complexes in Mesa and the Dominican Republic, as well as the renovation plans for Wrigley. A cynic might say, these things are being done to make more money for the owners. While there may be some truth in that, what I see are owners putting money back into baseball operations to build a championship organization. Sure, it might be a tough couple years (might be), but they just can’t keep doing what hasn’t worked for 105 years.

For me, this is perhaps the most exciting time in the 30 years since I have been the Cubs spring PA announcer. I’m not talking about this year per se, but about the direction that the Ricketts family, along with Theo and his staff, are moving the organization. I guess part of my excitement is seeing first hand the young talent in the pipeline, at the AZL Rookie League, Instructs, AZ Fall League, and at Camp Bussy over the last couple months. Yes, I’ve bought in. Ahhh spring, what a wonderful time of year!

Here are more of today’s photos.

Earlier this spring Cubs Manager Joe Maddon spoke of The Cub University, he said it could be a “liberal arts education in baseball.” 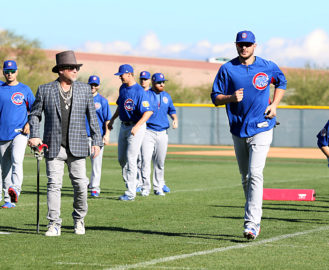 Get On The Buss, It’s An Experience

If you are visiting the Mesa/Phoenix area for spring training and want to take in some interesting baseball history, you should visit the Arizona Spring Training Experience and Cactus League Hall of Fame's new free exhibit at The Gallery at Scottsdale Civic Center Library. Some great Cubs photos by John Antonoff! More.