View my photos from today

As I was walking into Fitch Park I heard one fan say to another: “Won’t it be great when we come here next spring, and the Cubs are World Champions!” The guy looked at him quizzically and said “Okay?… ” then with a measured pause relents and says “Ya, it sure will…why not, the White Sox did it and so did the Red Sox, anything’s possible.” The First guy then says “My Mother is 87 years old, and been waiting all her life for the Cubs to win it” to which the 2nd guy replied “yeah, she’s due.”

To me, that conversation is part of what makes spring training unique, eternal optimism or perhaps delusions, that and the absence of harsh realities like being 10 games out in mid-May.

Ron Santo(see pic) made it out to Fitch Park today. Ron and Ryne Sandberg hung out behind the batting cages for a while comparing notes on this year’s club.

Certainly the players feel more relaxed during spring with no pressures of a pennant race…yet. Jacque Jones and Juan Pierre were seen singing and grooving around the batting cage today.

And only in spring training can you see a fan leaning against the outfield fence talking to a player during practice while the player shags fly balls, for the better part of 15 minutes. In this case the player was Neifi Perez who never met a conversation in any language he couldnt get involved in. Neifi said among other things, he likes the additions of Juan Pierre, and Jacque Jones. Jones has some serious pop in his bat. Neifi also said Ronnie Cedeno has major league skills and that he occasionally gives the kid some advice.

After a day like today I am almost inclined to believe those fans, that “anything’s possible” and the Cubs will be “World Champions”. One thing is certain, his 87 year old mother is “due”.

Ryno and Ron at Fitch today. 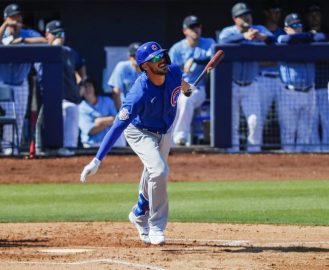 The Cubs outlasted the Mariners yesterday in a long (3:45) slugfest in Peoria,…

So the Cubs lost a couple split-squad games yesterday, big deal…It’s only spring…