As I write this the Cubs have been playing one of those games that give you pause to think, maybe this is the year. Kerry Wood is coming in for the 9th inning attempting to close this game against the Rockies…a game in which the Cubs were down 9-1 and now lead 10-9, and looking for their 5th straight win. Crap, Wood just walked the leadoff hitter…sweeeeet a double play and then Dome catches the third out! Cubs Win! I’m watching on MLB TV on the computer they are playing “Go Cubs Go” at Wrigley, the fans are all singing along, love it. Best record in baseball and 2 games up on the Cardinals, I can’t wait to get up to Wrigley in July.

The video I shot a few springs back of Cubs Pitcher Ryan Dempster doing his Harry Caray impression has been pretty popular on you-tube, over 120,000 views so far. So I thought I would post another Harry Caray impression, I shot this one at Hohokam Stadium as well. The guy is Matt Wagner, at one time he worked at Harry Caray’s restaurant in Chicago, maybe still does. You may have seen him impersonate Harry before, he is one of the best in my opinion…see what you think.

Cubs fan and actor Bill Murray’s wife has claimed the Wilmette native is a violent alcohol, drug and sex addict in court papers related to the couple’s impending divorce. Murray’s wife Jennifer Butler Murray claims she has been physically abused, cheated on, and alleges her estranged husband is addicted to marijuana and alcohol. She says that Murray would leave the country frequently without her “where he engages in public and private altercations and sexual liaisons.” The complaint also states that Murray physically abused his wife, and last November “hit her in the face and then told her she was ‘lucky he didn’t kill her.'”

Ouch…you never know what is true in these situations but she signed a pre-nup before they wed and will get $7 mill within 60 days of a final divorce decree. I met Murray during spring training back when Mark Grace was still playing for the Cubs, as a friend of Gracie’s you know Murray has some serious elbow bending skills.

Here is a bit of un-Cubs related pop-culture video flying around the Internet, singer Mariah Carey supposedly throwing the worst Ceremonial First Pitch ever at a baseball game in Japan…I’ll let you be the judge. I will say in my years as public address announcer for the Cubs at Hohokam I have seen many lousy “first pitches”. During spring training we have been known to do up to 5 ceremonial pitches before a single game. I have seen athletic looking men who appear in good health throw some rag arm weak arse crap as bad as this Mariah Carey toss…yes they were deservedly booed by the fans.

A somewhat weird and perhaps disturbing element of this non-story to me was the comments people posted about Carey after watching the video. I had watched it on Yahoo sports then glanced at a few of the posted comments…wow! It was interesting to read the venomous things people were saying, not about the throw but about her personally. These comments were multiplying fast by the hundreds probably thousands by now. Many of them so harsh you would think she had spit in the Pope’s face. I’m sure many of these were from kids now on summer vacation, still it left me scratching my head wondering were tolerance and civility has gone. It also made me think how easy it is to hide at home and be a computer bully, no one knows who you are, so you can say practically anything. I’m not a Mariah Carey fan myself but I bet 95 percent of these people if they met her in person wouldn’t make a peep…probably would ask for an autograph or photo with her.

I hope you all have a great weekend!

Today was the type of game that is easily forgotten by Cubs fans,… 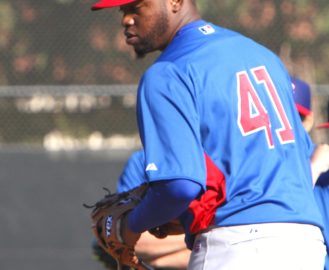 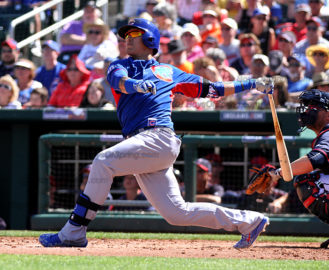