A cool but sunny AZ day brought 9,381 out to Hohokam to witness the San Francisco Giants beat the Cubs 5 – 1. The Cubs outhit the Giants 9 to 7 but couldn’t put more than the 1 run on the board which came courtesy of a Derrek Lee walk followed by an Aramis Ramirez double in the 4th inning.

Ryan Theriot was 3 for 3 but was picked off first base in the 1st inning, he did come back with a stolen base in the 3rd. The shortstop position continued to hit when Starlin Castro came into the game replacing Theriot and singled in both his at bats. A-Ram went 2 for 3 and Xavier Nady seeing his first game action as a Chicago Cub was DH today and singled in his first at bat.

Carlos Zambrano got the start and looked good in the first two innings but had some issues in the 3rd, giving up 5 runs on 6 hits including a no doubt grand salami by his hometown buddy Pablo Sandoval. Zambrano was followed by a succession of Cubs pitchers: Grabow, Parisi, Cashner, Diamond, Gaub, and Berg who each tossed a scoreless inning, allowing the Giants only 1 single over the course of the final 6 innings.

Derrek Lee left the game after fouling a pitch off his leg or foot, I couldn’t see which. Hopefully it’s nothing serious. Aramis Ramirez had a throwing error today but also made a great pick up and throw on a Juan Uribe hot smash with a runner on 3rd. The Cubs who had their normal batting practice pre-game also took BP after today’s game probably making up for lost time due to weather. Or perhaps it’s just that Lou doesn’t like the Cubs only scoring 1 run in a game.

Cubs President Crane Kenney was hanging on the back of the batting cage chatting with Lou Piniella during morning BP. I found out from Gene a Chicago friend of mine that Kenney had flown into AZ on the same plane with him – in coach no less.

Cubs are headed to Peoria AZ tomorrow to take on the San Diego Padres and then will have split squad games the following two days including Friday and Saturday contests against the White Sox in Las Vegas. Rumor has it that while in Vegas on top of his managerial duties Ozzie Guillen will be starring in his new Cirque Du Soleil show “Viva Ozzie”, Sox fans will eagerly await his Tweets from backstage.

Nady gets his first Cubs hit- Photo by John Antonoff 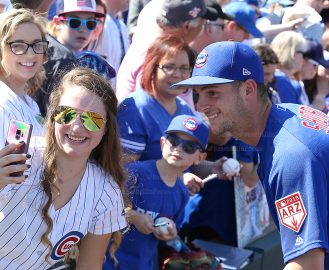 Back Where It Started 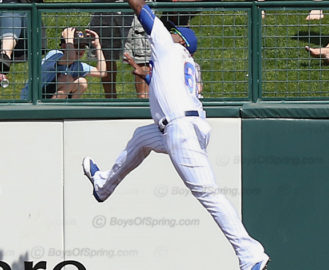 We will break the MLB record for Spring Training home attendance today at Sloan Park, besting the previous MLB record...