Yesterday, I decided not to make the 100 mile round-trip drive from my house to watch the Cubs play the Cleveland Indians in Goodyear, AZ. Instead I went over to Fitch Park to watch Ryan Dempster and the Cubs minor leaguers play. I just love the relaxed low key environment at Fitch Park; it’s a great place to see the up and coming ballplayers in the Cubs system.

As for Dempster, according to AZ Phil over at The Cub Reporter, Dempster pitched against a lineup of “A”-ball kids, allowed six runs on eight hits in five innings of work. I never like to read too much into an outing like this by a major league pitcher against young aggressive kids. For all we know Dempster could have been working on a specific pitch, the bottom line is, he was getting his work in and staying on his rotation schedule.

The Cubs play the San Diego Padres today at Hohokam, I’ll be back later today with a report on that. Here are a few of my pics from yesterday at Fitch.

Last night I awoke to a loud crash of thunder at about 2:30am… 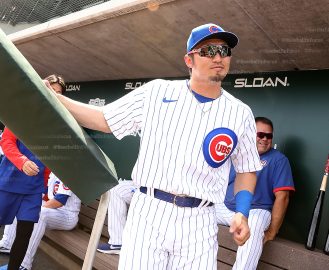 Just a quick note, Mark Prior is scheduled to pitch a simulated game…