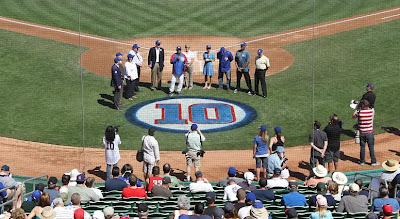 The Cubs honored Ron Santo today with a special pre-game ceremony and dedicated a memorial plaque below the press box booth where he signed untold numbers of autographs every spring.  Ron would have loved the outcome of today’s game, another exciting walk off win as Brett Jackson went opposite field driving in Jim Adduci with the game winning run. The Cubs came from behind to beat the Cleveland Indians 2-1 in front of 7,186 sun-drenched #10 hat wearing fans. The hats with Ron’s number were given away at the gate.

This was a quickly played (2:22), well-pitched game with Randy Wells going 4 strong shutout innings allowing only 1 Indian hit. Wells was followed by Kerry Wood who allowed a lead off hit to Travis Buck but then promptly K’d 3 out-matched Cleveland batters to retire the side.  Andrew Cashner followed Woody and the second batter he faced was Jayson Nix who hit a solo home run. Cash settled down and ended up going 4 innings to finish the game allowing only the 1 run and 2 other hits while striking out 3. Cashner also was the first Cub to get a hit of the day after 5 and 2/3rds innings of no hit pitching by the Indians.

The Cubs down 1-0 in the bottom of the 8th were able to score the game tying run after Marquez Smith hit a double, then went to 3rd on a wild pitch and was able to score on Indians’ backup catcher Chun Chen’s ill-advised throw to 3rd.  In the 9th, Jim Adduci (pronounced ‘Uh-Doo-See’ for those who keep saying Uh Doo-Chee) led off with a single and Fernando Perez was able to reach on a fielder’s choice, after two Cubs outs, Brett Jackson who came in to play LF knocked in the game winner.

Other plays of note: Darwin Barney made a nice grab of a pop foul against the wall for out number 2 in the 1st inning.  Matt Camp had an excellent at bat in the 8th when he fouled off what seemed like a dozen pitches while Marquez Smith was on 2nd base which helped Smith to eventually score.  Camp ended up drawing a walk. I had a feeling the Cubs were going to come through with the win with Adduci on 2nd and two former #1 draft picks up in a row in Josh Vitters and Brett Jackson. Tyler Colvin started at 1st base and played well defensively other than a bobbled catch of a Kerry Wood throw that might have nailed Travis Buck off 1st base in the 4th inning.

Humorous notes of the day: Cleveland catcher Carlos Santana ( I don’t think any relation to the guitar master) tossed the ball down to first after Aramis Ramirez struck out in the 2nd only problem was, Ramirez only had 2 strikes at the time. The Hohokam sprinkler’s popped on unexpectedly while Wellington Castillo was at the plate in the 8th inning.  Perhaps Cleveland defense was overheated and needed a cool down in the 88 degree sun.

The pre-game ceremony honoring Ron Santo included his daughter Linda Brown throwing a ceremonial pitch to Kerry Wood. Cubs Chairman Tom Ricketts spoke about Ron’s background and what he meant to the organization and to all Cubs fans. The whole Ricketts family was on field for the presentation, as well as Ron’s wife Vicki, son Jeff Santo, and Mesa Mayor Scott Smith.  These ceremonies can keep a P.A Announcer on his toes as our schedule had listed four speakers to be introduced and literally at the last second, 5 people were added. Billy Williams, Fergie Jenkins, and Randy Hundley all spoke heart warmingly about their former teammate. It was my great privilege to participate in honoring this great Cub and amazing person – Ron Santo. 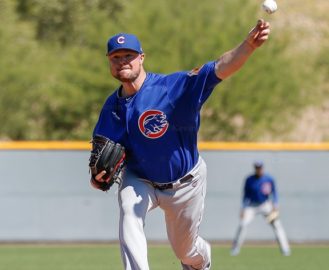 We had a fun day at Hohokam yesterday, I hope you had a…

We have a lot of fun here at Boys of Spring, especially during…