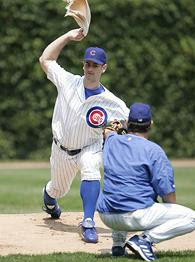 Seems like only yesterday when I would finish each Cubs spring camp by following Prior and his “loose shoulder” over to for extended spring training rehab. It’s hard to put into words the joy of watching a professional pitcher work a towel like he did, the artistry of movement, the flowing Terrycloth extending from his hand…I’m sorry for getting all sentimental – kids, they grow up so fast.

Prior says “Part of this exercise (his comeback attempt) is to find out, what kind of pitcher am I”. A good start would be the kind that can actually pitch. Word is Prior is hitting 92 mph with his fastball, down from his 95 or so he used to throw back in the day and 30 isn’t really that old for a pitcher. Heck former Cub pitcher Jamie Moyer pitched 17 seasons’s after he was 30 years old. With Prior’s injury background and throwing motion it will be a big feat just to make it back to the Majors.

Prior sure didn’t work out for the Cubs like us fans had hoped but he did give us 2003 when he went 18-6 with a 2.43 ERA, was third in the Cy Young voting and helped nearly get the Cubs to a World Series…the key word “nearly”. Of course that 2003 season ended in the usual haunting Cubs fashion but when you’re going through a season like 2010, “nearly” sounds pretty good.

Happy 30th Birthday Mark Prior and good luck with your latest comeback effort; maybe we’ll see you with the Rangers next spring…I’ll have a towel ready just in case.

View my photos from today Another beautiful sunny AZ day. As I was…

With the Cubs final spring game only one week away, I’m getting very…

Javy, Grandpa Rossy, and The Hawk

Before Sunday's night game against Kansas City at Sloan Park I had the opportunity to chat with former Cubs Willie Wilson and one of my all-time favorite players, The Hawk - Andre Dawson!

After all my travel and activities since the final spring game at Sloan Park last week, I was ready to sit down, relax, and watch some Cubs baseball last night. I grabbed one of my lucky Cubs hats...