Last night I awoke to a loud crash of thunder at about 2:30am and with the appearance of a small pond in my front yard this morning I’m guessing it must have rained all night. Right now it’s around 45 degrees and still raining, so it’s a good day for the Cubs…to simulate April conditions at Wrigley. Starting tomorrow the 10 day forecast looks outstanding and we’re expecting partly sunny skies and a high of 70 for Thursday’s opening spring game at Hohokam.

This past Thursday evening I had the pleasure of being invited to the Mayor’s Reception for the opening of the “Play Ball, The Cactus League Experience” at the Arizona Museum for Youth (AMY). They’ve really added and expanded the story for the “Play Ball” exhibit at the new AMY location, it’s close to Hohokam and well worth the visit. As you might have guessed the Cubs are particularly well represented in the exhibit having been in Arizona for spring training 58 of the last 59 years. The Mesa Historical Museum and it’s Executive Director Lisa Anderson were very much driving forces in making this exhibition come to life.

At the reception Robert Brintion who holds so many titles it’s hard to keep track, not the least of which is Cactus League President gave some background on spring training and then introduced Mesa Mayor Scott Smith. The Mayor gave some words and then opened the exhibit with former Arizona Governor Rose Mofford.

Governor Mofford in large part helped save the Cactus League from extinction in the mid-late 1980’s when Florida was making efforts to become the sole MLB spring training league. The course of action set by Mofford and a host of influential Arizonans has obviously worked well; with the 2010 addition of the Cincinnati Reds to the Cactus League, Arizona now has an equal 15 teams to Florida’s Grapefruit League.

At the exhibit reception I ran into many friends and met others whose time and dedication helped make this exhibit possible. One of the friends I talked with is Dave Dunne who oversaw the running of Hohokam Stadium since it opened in 1997, Dave is from Chicago and a big Cubs fan. This off-season Dave was given an offer too good to refuse and has left Hohokam/City of Mesa and is now Manager of Spring Training Operations for the Arizona DBacks. Currently his job entails the overseeing of the new DBacks/Rockies spring facility being built on the Salt River Pima-Maricopa Indian Community land. This job change is great for Dave and his family but he will be missed at Hohokam.

Here’s a few pics from the “Play Ball, The Cactus League Experience”, only a few though as you need to go and see it for yourself.

Yes, you can sing along with Harry at “Play Ball”

The weather is a bit dicey today here in Mesa, currently a 40… 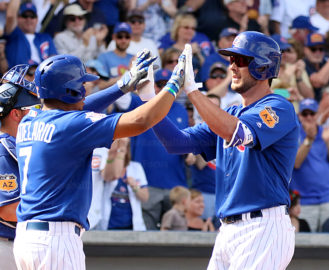 The Cubs did some slugging over the weekend, scoring 18 runs in two games...

The D-Train pulls into Fitch Park, and other sightings.

Exclusive Cubs photos from today at Fitch Park, including Matt Garza, Dale Sveum, Darwin Barney, the D-Train, and two guys who have over 5400 major league hits between them!