Pitchers and Catchers don’t officially report until tomorrow but some of the guys are already in Mesa working out at Fitch Park. I took a few photos and posted them here…a first look.

Signs of spring at Fitch today!

Mostly the guys just tossed the ball to loosen the arms and did some light running. Some of the players who are already at Fitch are Geovany Soto, Jeff Samardzija, Angel Guzman. Neal Cotts, Chad Gaudin, Joey Gathright, Randy Wells, Jake Fox, Brad Snyder, Richie Robnett, and Koyie Hill from the 40-man roster…as well as an assortment of minor league guys including Steve Clevenger, Darwin Barney and several I couldn’t recognize without numbers.

Some BP was taken, but until Saturday it’s pretty informal. Jake Fox took some extra grounders at third base after BP. Angel Guzman looks as if he’s hit the weight room a bit in the off season, hoping this helps him avoid the injury bug…he’s out of options. My new favorite name this spring Richard Pryor Robnett III, I’m not sure how funny this guy is but he can hit the ball a long way. Robnett 25 was one of the guys the Cubs picked up along with Justin Sellers from the A’s in the Wuertz deal. He had surgery to remove a benign stomach tumor last year and his AAA numbers suffered but he looks healthy and strong now. Richie needs to get him some Cubs gear as he was still wearing A’s workout shorts.

Of course as you may know one of my very favorite Cubs names is Theodore Roosevelt Lilly…Ted isn’t at Fitch yet but I thought it appropriate to mention the name on this 200 year anniversary of Abe Lincoln’s birthday. Here is an appropriate Lincoln quote for the day –

“Things may come to those that wait, but only those things left by those who hustle.”

Checking out the AZ Ivy, actually Oleanders that can reach 20 feet in height

A Kris Bryant HR at Cubs Park in Mesa, gave the fans something to get excited about. 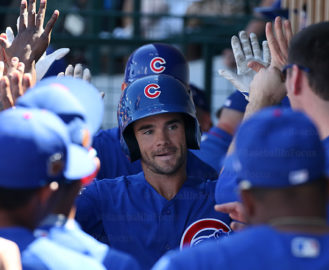