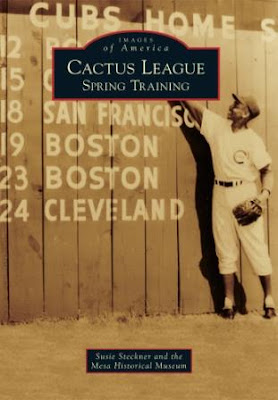 I would like to bring a new book to your attention, Cactus League: Spring Training, part of the Arcadia Images of America series. The book was written by Susie Steckner and the Mesa Historical Museum. It showcases the rich history of the Cactus League in Arizona with over 200 photographs, many never-before-seen. The 128-page book, offers an insider’s look at the players, personalities, fans and destinations that helped shape the league and baseball in the Grand Canyon state.

A dozen photos from my collection are featured in the book. Most of them are historical photos that I have collected, with one that I shot at Hi Corbett Field in Tucson in 1992. I can tell you the Cubs are well represented in the book, with many vintage photos including Ernie Banks, Fergie Jenkins, Ron Santo, Harry Caray, and many more.

A portion of all sales benefits the non-profit Mesa Historical Museum, which houses the nation’s only collection chronicling Arizona’s spring training journey. www.playballexperience.com


Author Susie Steckner will be signing copies of her new book throughout the spring season at these locations:

Not a lot going on today in terms of on field practice. Big…

The Ryno Goes to…

Snatching defeat from the jaws of victory! That Cubs opener yesterday was a…