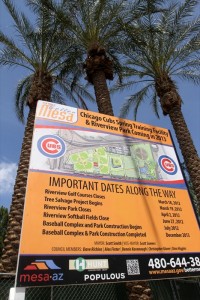 Last week it was announced that the Cubs plan to tentatively break ground on the new $100 million dollar plus spring training facility here in Mesa on July 11th. Of course, this is a somewhat ceremonial gesture as work is already being done at Riverview Park where the new complex will be located.

During the end of April work began at Riverview Park, and the now closed Riverview Golf Course, to save some of the mature trees. The plan is to save and transplant 66 mature pines and 90 native trees to the new Cubs complex. This will help give the new facility a less stark and more established look. One of the other big landscape undertakings will be to drain the current lake, then reconfigure and construct a new lake to fit into the complex. I dropped by Riverview to take a look (and a few photos) and see how things are coming along.

We don’t really have a name for the facility yet, as naming rights are likely to be sold for the stadium, and perhaps other areas of the new complex.  The business and retail portion that is planned, but likely will come later, is unofficially known as Wrigleyville West. Currently, I’m using Wrigleyville West as the generic name for the new complex.

The timeline for completion of the Cubs complex has evolved. A recent plan was to have a soft open in the fall of 2013 with Arizona Fall League games played there, but that is not going to happen. The current goal is to have the complex open by December 2013, or January 2014, with the Cubs inaugural spring season being 2014.

I have a soft spot for Riverview Park; for several years I had played in softball leagues there. We had some pretty good teams too, even reaching the big state tournament.  For me, it would be an incredible experience to open the new Cubs spring complex as the P.A. announcer at this Riverview site. The new stadium would be my third as the P.A. announcer for our boys in the blue pinstripes. Funny, but it doesn’t seem like very long ago that we opened a brand new Hohokam Stadium.

It was the spring of 1997. I was working for a local TV morning show at the time, and I talked them into doing our show live at the brand spankin’ new Hohokam. I learned a couple things that day. One, that many people remembered our then morning weatherman Steve Deshler from his years with WLS-TV in Chicago. And two, that Cubs pitcher Mel Rojas was not a great choice for an interview, especially before 8am. Rojas who is a cousin of Moises Alou, showed that an extreme economy of words does not lead to a riveting interview. It’s also interesting how the 1997 state-of-the-art Hohokam Stadium, seems not so state-of-the-art now, only 16 years later.

While Hohokam has seen plenty of use over those years, it is still a decent functional stadium; much newer than Phoenix Muni, which hosts the Oakland A’s during spring. Phoenix Municipal Stadium was originally built in 1964, making it the oldest stadium being used in the Cactus League. That is why the A’s are looking to possibly move to Hohokam when the Cubs leave for the new digs at Wrigleyville West. The A’s are in an exclusive bargaining agreement with Mesa that ends at the end of May. I’m told the Athletics are very interested, and have been recently going over Hohokam with a fine tooth comb.

If the A’s decide to move to Mesa for spring training, Hohokam will undergo some changes. After the Cubs leave Hohokam following the 2013 spring season, the stadium would then close for renovations. The renovations would include a reduction of seating capacity (the A’s don’t draw like the Cubs). If the A’s make the switch, their first season at Hohokam and Fitch would be spring of 2015.

With news of the July 11 groundbreaking came new artist renderings of the Cubs proposed complex and stadium. While Hohokam is still functional, there are going to be some real pluses and upgrades at the new Cubs complex. Some of those include, 7 practice fields (and a half diamond) along with other training areas all in the same complex as the stadium, much better street access and parking, more shade, more suites, along with larger and better configured outfield grass seating. Overall, the stadium will also have a greater seating capacity (likely 15,000 to Hohokams 13,000), which would make it by far the largest spring training stadium in all of baseball.

One thing that really stands out to me, and it’s what makes the newer spring stadiums superior to Hohokam, is the elevated press box and suites. This will really add to the ambiance of the new Cubs stadium. What the elevated press box means in practical terms, is that there is no separate interior concourse. You can walk to a vendor or concession window underneath the press box and turn your head and still watch the game going on. If you go into the main concourse at Hohokam, you’re essentially in a tunnel. You are cut off from the game, and unlike Wrigley there are no TV’s to see what’s going on.

Another interesting aspect of the new complex is the very real possibility (in final negotiations) that the Cubs will share the facility with the Arizona State University Sun Devils baseball team.  Like the Cubs agreement with Mesa, the Sun Devils would sign on with the new complex for a period of 30 years. 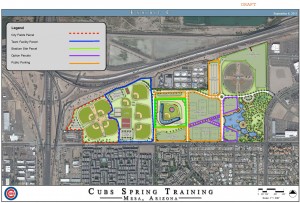 This move would bring an extra 40 games to the new stadium, possibly more if it hosts the NCAA regional and super regional.  ASU has a traditionally strong program having won the college World Series five times. According to this article, outside of Hawaii, the Sun Devils lead west coast college baseball in attendance. ASU would have their own practice field and clubhouse. This is really a cost savings move for ASU, looking at a potential $20-30 million price tag to renovate their current home, Packard Stadium. The move would likely boost Sun Devil attendance…especially if beer is sold! For the Cubs, the partnership will bring more people to the complex outside the months of February and March.

From the looks of it, the retail “Wrigleyville West” portion of the development will begin some time in the future. Currently there are several open retail spaces right across the street, nice spaces that are looking to be leased. Until the market in this area catches up, or the new Cubs facility takes off, it’s doubtful that many new restaurants or hotels, will be built here. The area already has plenty to offer with Mesa Riverview retail stores right across the Street (Dobson Rd.), and the Tempe Marketplace, just a mile down 8th street.

All in all this is an exciting project for Cubs fans, and it should be one of the best spring training set-ups in baseball. The new spring complex will add another positive for attracting free agents players. With some young talent in the Cubs pipe-line, the 2014 opening of the new spring complex could be the start of a great year. In the larger picture, this will be an important piece for sustaining long term success for the Cubs organization.

The Cubs had a productive spring in Arizona, and had a bit of…

Bring on the Beer Boys

Reflections on the Opener